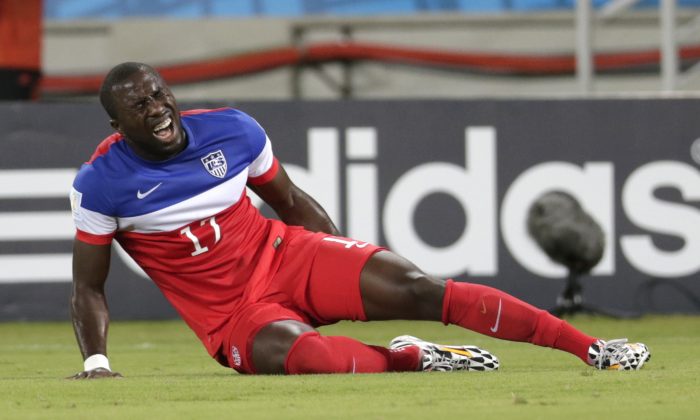 Jozy Altidore is still in rehab after suffering an injury last week.

The Team USA player had strained his left hamstring in the United States’ 2-1 victory over Ghana.

“It’s bad news, but I think the team will handle this,” midfielder Jermaine Jones said Thursday.

“We have to handle that.”

In an appearance on Good Morning America, Altidore said, “I’m just going to focus on getting myself right and being the best cheerleader possible for the team.”

“I think we have a lot of good players here that are going to step in right away and do a good job for us.”

Here is an AP article on Jozy Altidore’s rehab.

Altidore was still smiling — even if this is hardly the way he envisioned his World Cup going.

The Sunderland striker, who scored twice in his team’s final sendoff series match against Nigeria, strained his left hamstring in the first half of Monday’s 2-1 victory against Ghana in Natal. He will miss Sunday’s second Group G match against Portugal at Manaus.

Teammates and coach Jurgen Klinsmann are still hopeful he will play again in Brazil.

Klinsmann is likely to choose between Aron Johannsson — Altidore’s replacement against Ghana — and Chris Wondolowski to start Sunday.

“Jozy is a special player. You can’t — it’s like saying, ‘Hey, go be Cristiano Ronaldo’ — you can’t necessarily replace certain aspects of it,” Wondolowski said. “But I think both Aron and I bring different styles, different sets of skills that I think are useful, and I think that’s what we’re going do.”