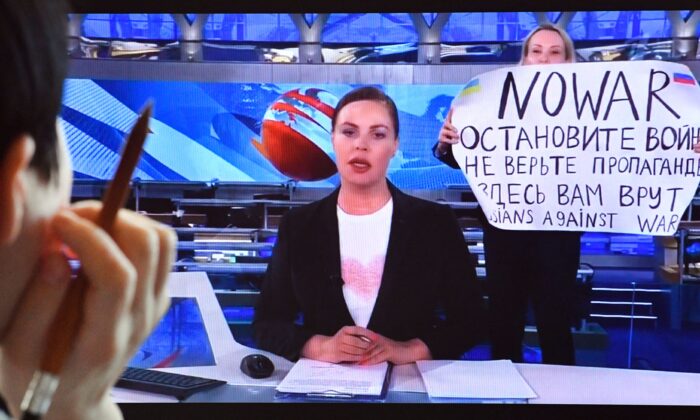 An image of Russian Channel One employee Marina Ovsyannikova entering Ostankino on-air TV studio in Moscow during Russia's most-watched evening news broadcast on March 14, holding up a poster that reads as "No War" and condemning Moscow's military action in Ukraine, taken on March 15, 2022. (AFP via Getty Images)
Russia-Ukraine War

A journalist at one of Russian state television’s biggest channels has reportedly been arrested after protesting against the Moscow-led invasion of Ukraine live on the show.

The woman, identified by multiple reports as Marina Ovsyannikova, allegedly works as an editor at Russia’s state TV flagship program, Channel One.

She interrupted a live broadcast by running onto the set of the show on March 14 shouting, “Stop the war. No to war.”

Ovsyannikova was also brandishing a sign that read in both English and Russian, “No war,” “Stop the war,” “Don’t believe the propaganda,” “They are lying to you here,” and “Russians against war.”

Despite her demonstration live on air, the news anchor continued to read from her teleprompter before the camera switched to a different report.

The woman was identified by the head of the Agora human rights group, as Marina Ovsyannikova, a journalist who works for the channel. Pavel Chikov, head of Agora, said she had been arrested and taken to a Moscow police station.

She could face prison time under a new law signed by President Vladimir Putin that criminalizes anyone sharing “deliberately false information about the actions of Russian military personnel in Ukraine.”

The law would impose up to three years, or fines but at a maximum, the punishment rises to 15 years for cases considered to have led to “severe consequences.”

Russia’s state news agency TASS reports that Ovsyannikova could also be charged under legislation banning public acts that aim to “discredit the use of Russia’s armed forces.”

The Epoch Times has contacted Channel One and the Agora human rights group for comment.

In a pre-recorded video published online, a woman who appeared to be Ovsyannikova and described herself as a Channel One employee said she was “ashamed” of having worked on the show and spreading “Kremlin propaganda.”

“Regrettably, for a number of years, I worked on Channel One and worked on Kremlin propaganda, I am very ashamed of this right now. Ashamed that I was allowed to tell lies from the television screen. Ashamed that I allowed the zombification of the Russian people. We were silent in 2014 when this was just beginning. We did not go out to protest when the Kremlin poisoned [opposition leader Alexei] Navalny,” she said.

“We are just silently watching this anti-human regime. And now the whole world has turned away from us and the next 10 generations won’t be able to clean themselves from the shame of this fratricidal war,” the woman added.

The woman was wearing a blue and yellow necklace of the Ukrainian flag in the video and said her father is Ukrainian and her mother is Russian.

“What is happening in Ukraine is a crime and Russia is the aggressor,” she said. “The responsibility of this aggression lies on the shoulders of only one person: Vladimir Putin.”

The woman ended the video by urging her fellow Russians to join anti-war protests in an effort to help bring an end to the ongoing conflict.

“We Russians are thinking and intelligent people. It’s in our power alone to stop all this madness. Go protest. Don’t be afraid of anything. They can’t lock us all away,” she said.

Russia’s news coverage is closely monitored by President Vladimir Putin’s government, and Moscow has been quick to launch a stringent crackdown, shutting down and blocking media outlets that move away from the narrative that is dictated and heavily controlled by the Kremlin.

In a video address, Zelensky said, “I’m thankful to those Russians who don’t stop trying to deliver the truth, who are fighting against disinformation and tell real facts to their friends and families, and personally to that woman who went in the studio of Channel One with an anti-war poster.”