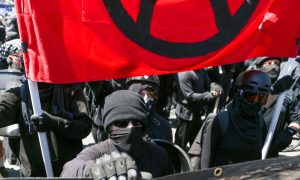 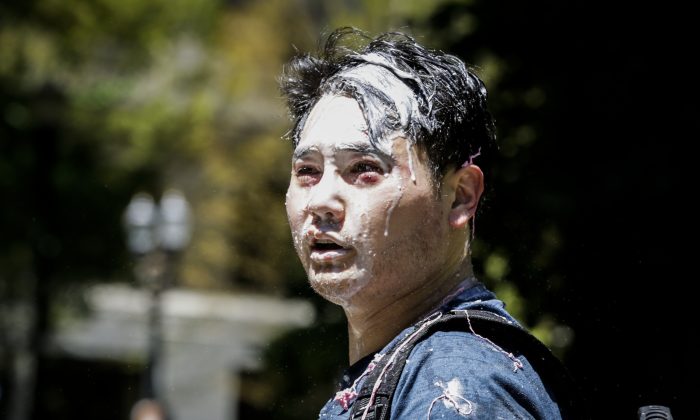 A home security camera captured an unsettling scene this Halloween night: a group of men showing up at journalist Andy Ngo’s door, each of them wearing print-out masks of Ngo’s face.

“These 6 individuals wearing print-out masks of my face approached my family’s home last night, repeatedly rang doorbell, pounded on window, recorded footage of property, & gestured at cameras. There were no candy bags,” wrote Andy Ngo in a Nov. 1 Twitter post. According to the 33-year-old journalist, the creepy Halloween night harassment happened after the violent leftist group Antifa doxxing his elderly mother’s small business.

These 6 individuals wearing print-out masks of my face approached my family’s home last night, repeatedly rang doorbell, pounded on window, recorded footage of property & gestured at cameras. There were no candy bags. This follows their doxing of my elderly mom’s small business. pic.twitter.com/dH8qn1YS85

In the video shared by Ngo on Twitter, a group of six hooded, masked men can be seen approaching Ngo’s front door. As Ngo has pointed out, not a single one of these thug-like individuals were holding any candy bag or pumpkin bucket like a genuine Trick-or-Treater would do.

After recklessly pushing the doorbell, yelling “trick or treat,” banging on the door, the group of thugs left the front of the house. They began waving and pointing at a security camera that appears to oversee Ngo’s driveway in a manner that closely resembles an iconic scene from the 2013 home-invasion horror movie “The Purge” while recording the property using their cell phones.

According to Ngo, the 48-second long clip is a shortened version of a series of harassment that lasted “several minutes.”

At this article’s time of publication, the video of the incident is labeled by Twitter as “includes potentially sensitive content” and is hidden as a result.

“This is the latest addition to a long list of Antifa-related individuals doxing, threatening, and promising to hurt or kill me or my family,” wrote Ngo in a statement released to the Post Millenial, an online news publication for which Ngo works as an editor-at-large. He also stated that the thugs fled before the police arrived on the scene.

I was beaten on the head & robbed on 29 June. Antifa then continued to hurl “milkshakes” at my bleeding face. I was hospitalized with a brain hemorrhage. There still hasn’t been a single arrest by @PortlandPolice. Help me seek justice; join my legal fund: https://t.co/QtCt7A6zJp pic.twitter.com/sis8pFo3lf

Andy Ngo is a prominent critic of Antifa, a group whose violent approach has been largely dismissed by mainstream media. Ngo received media attention this summer after he was beaten and robbed by Antifa protesters in Portland, Oregon. He ended up in an emergency room with a brain hemorrhage as a result of the attack.