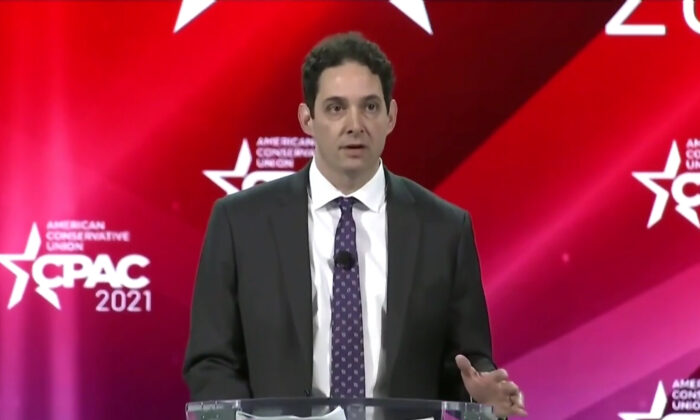 Alex Berenson speaks on censorship and freedom of speech at the Conservative Political Action Conference at the Hyatt Regency in Orlando, Fla., on Feb. 26, 2021. (CPAC/Screenshot via NTD)
Media & Big Tech

Independent journalist Alex Berenson and Twitter have agreed to a settlement over a lawsuit that alleged the big tech company violated Berenson’s constitutional rights when it banned him.

The parties “have reached a settlement in principle,” according to a joint stipulation filed in federal court in California on June 29.

However, additional time is needed to finalize details of the settlement, the parties said.

Lawyers for Berenson and Twitter, in the filing, asked U.S. District Judge William Alsup, a Clinton appointee, to extend deadlines to produce certain documents, known as discovery, in light of the agreement.

Alsup extended the deadlines by 14 days, less than the 28 days requested, and said that he would not allow any further extensions.

“Counsel are fully able to negotiate and litigate at the same time,” he wrote in an order.

Additionally, Twitter can take a deposition of Berenson by the end of July and Berenson can take depositions of two current or former Twitter employees by mid-August.

The filings contain no details concerning the settlement details. Berenson said in an initial blog post that he couldn’t share details until the settlement is actually filed but later pointed out how he’d promised that “there would be no settlement without third-party discovery.”

Berenson emphasized he will not accept an agreement unless it allows him to not only obtain materials from Twitter, but to talk about those materials.

Twitter banned Berenson, formerly of the New York Times, from the platform in August 2021, claiming he violated the company’s rules against promoting COVID-19 misinformation.

Berenson said in the suit that he was assured by a senior executive that he would not be banned, that he did not break the rules, and that Twitter broke its promises and policies in removing him.

He accused Twitter of violating the U.S. Constitution’s First Amendment, federal laws, and the California Common Carrier Law, as well as breaching the user contract it entered with Berenson.

Twitter tried to dismiss the suit, but Alsup allowed it to proceed with the breach of contract claims.

“Here, Twitter allegedly established a specific, detailed five-strike policy regarding COVID-19 misinformation and its vice president gave specific and direct assurances to plaintiff regarding his posts pursuant to that policy. Any ambiguities in a contract like Twitter’s terms of service are interpreted against the drafter, Twitter,” he said in his order on Twitter’s motion. “And, at the pleading stage, this order must construe all allegations in the light most favorable to plaintiff’s allegations. Plaintiff plausibly avers that Twitter’s conduct here modified its contract with plaintiff and then breached that contract by failing to abide by its own five-strike policy and its specific commitments set forth through its vice president.”