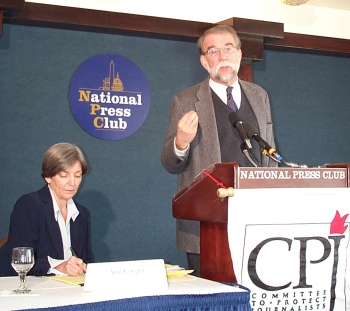 Journalists’ Deaths and Imprisonment Increase in 2005

Assassinations of journalists in Iraq and the Middle East, widespread jailing of reporters in China and Cuba, and the pervasive self-censorship in Latin America are some of the most disturbing findings in Attacks on the Press in 2005 . This annual press freedom report was released on February 14 by the Committee to Protect Journalists (CPJ) at the National Press Club in Washington, D.C.

CPJ found that a total of 47 journalists were killed as a direct result of their work, and murder was the leading cause of deaths. According to the report, "More than three-quarters of the journalists killed on duty were targeted for murder…" Nearly half the total killed, 22, were journalists working in Iraq, making it the most dangerous place for journalists in 2005, replacing the Philippines. The report sadly observes that killers in most cases have little to fear that their crimes will be punished. Mostly, the murders were carried out with impunity. According to CPJ research spanning more than a decade, less than 15% of journalist murders are ever solved.

Further, CPJ found in 2005 a total of 125 journalists who were imprisoned by 24 countries for their work, which was an increase from the situation of 2004. Four countries account for more than two-thirds of the total: China with 32 journalists behind bars, Cuba with 24, Eritrea with 15, and Ethiopia with 13.

Internet censorship in China was a special concern at the press conference. Their more than 100 million Internet users "face a massive and sophisticated government firewall, restricting news and information," according to the report.

Bob Dietz, the Asia Program Coordinator, noted that 18 out of 30 journalists jailed in China are due to Internet related "crimes." He expects that media control and suppression of public opinion will continue in China in 2006. Mr. Dietz worries that the Asian countries of Vietnam, Singapore and Malaysia would follow China's example of media suppression on the Internet. The CPJ is concerned that if this issue does not get solved, China may become the model for other totalitarian regimes.

Speaking of western technology companies, such as Microsoft, Yahoo, and Google, that have assisted China in suppression of press freedom on the Internet, Mr. Dietz noted that the CPJ deals with those companies a lot. "We do believe these companies have considerable leverage in China. We do not buy their claim: 'We have to do business in China. Our business activities will eventually bring China around.'" The CPJ is seeking to increase public pressure on this issue, and relies on the western companies themselves to make the right choice. Each of these companies was founded upon some ideal, he observed. Assisting China in suppressing press freedom and persecuting its own people is controversial inside those companies.

The China section of Attacks on the Press states: "The government-run People's Daily reported in February that censorship agencies permanently shut down 338 publications in 2004 for printing 'internal' information, closed 202 branch offices of newspapers, and punished 73 organizations for illegally 'engaging in news activities.'" Detailed descriptions of the 32 Chinese journalists imprisoned have been included in the book, including Zheng Yichun, Shi Tao, Zhang Lin, Huang Jinqiu, Zhao Yan, and Guo Feixiong.

Zheng Yichun, a prolific writer, is a regular contributor to online news sites, including The Epoch Times . Attacks on the Press states, "Sources familiar with the case believe that Zheng's harsh sentence may be linked to Chinese leaders' objections to [ The Epoch Times ] series 'Nine Commentaries on the Communist Party…'"

Commenting on columnists of The Epoch Times in mainland China such as Zheng Yichun and Shi Tao, Mr. Dietz says that journalists in China are accustomed to Internet censorship. He holds them to high regard; although they have to confront the censorship, they continue pushing the limits and work towards tearing down the media control. "They are aware of their responsibility."

Mr. Dietz sees that for journalists in China, CPJ is not only researching and advocating, but also playing a supporting role. "We know they [journalists in China] are frustrated. We know your colleagues in China are under great pressure." Campaigns to free individual journalists tend to take a long time. However, people are aware of these campaigns. CPJ Executive Director Ann Cooper pointed out how important it is for the morale of journalists working under difficult circumstances to know about these campaigns.

Ms. Cooper and Mr. Dietz expressed their concern upon learning from a comment from a member of the audience that The Epoch Times ' Chief Technical Officer in charge of Internet censorship breakthrough was assaulted and robbed of two laptops in his own home in Atlanta last month. They requested further information for the CPJ to investigate the case.

The Chairman of CPJ, Paul E. Steiger, who is managing editor of the Wall Street Journal , wrote in the preface of Attacks on the Press in 2005 concerning his suspicion that the rise in deaths and incarcerations abroad is related to the fact that the United States, "long a bastion of press freedom," has behaved poorly. He cites the incarceration of New York Times reporter Judith Miller, jailed for 85 days, and "the U.S. military stonewalling investigations into the deaths and detentions of journalists in Iraq." He wrote, "…repressive governments are delighted when a democracy like the United States imprisons a journalist. It makes it easier for them to justify their own restrictive policies."

In response to the question of whether the CPJ has made a difference, Ms. Cooper cited that Mexico had just named a special prosecutor to investigate crimes against journalists. CPJ representatives spoke with Mexico's President Vicente Fox, about "the climate of impunity that leaves the media open to continuing attack." The murders of several Mexican journalists go unsolved due to the "sluggish pace" of investigators; state and local authorities, according CPJ research, are well known for their corruption and having few resources.

Founded in 1981, the Committee to Protect Journalists responds to attacks on the press worldwide. CPJ documents hundreds of cases every year. More information about Attack on the Press in 2005 is available on CPJ web site at www.cpj.org.