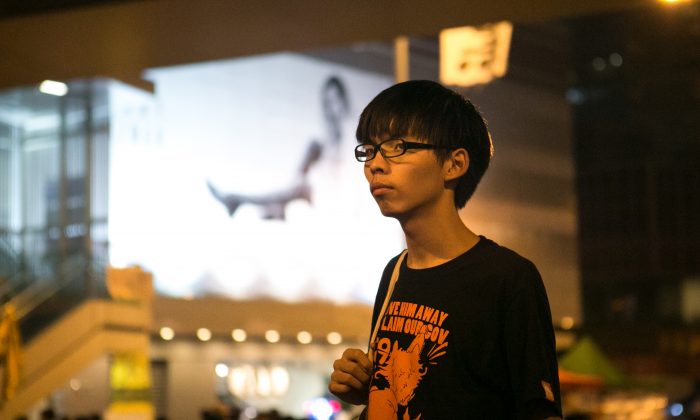 What’s Joshua Wong up to these days?

About a month and a half after the 79-day long Occupy Central streets protests, the Hong Kong pro-democracy movement’s most recognized teenage face is still hard at work promoting genuine democratic reform in the city, and finding time for a hobby.

Wong had earlier identified a need to reach out and explain to various communities why an on-going public consultation on political reform—the Hong Kong government is backing a restrictive Beijing reform package that denies residents a free vote—has to be rejected.

So when Wong is not running into top officials at radio stations, as well as getting charged and let off by the courts and the police, the leader of Scholarism has been distributing pamphlets at street corners with his student group and planning to “mail attack” embattled Hong Kong leader with 10,000 pro-democracy material.

And on Monday, the 18-year-old was invited to share his experiences with students from Baptist Lui Ming Choi Secondary School. The middle school is known for its liberal approach to socio-political issues, and still commemorates the 1989 Tiananmen Square student protest, a contentious topic that is still being censored in mainland China.

In a Facebook post, Wong says he’s willing to speak in schools and churches upon email request.

Wong also finally seems to have some spare time to be “interfered” with by “foreign forces.”

In October last year, Chief Executive Leung Chun-ying claimed that the Umbrella Movement—what supporters have dubbed the pro-democracy movement—is being manipulated by external parties, and promised to furnish proof.

But running street protests and hurrying off to interviews and press conferences meant that Wong couldn’t indulge in his Gundam scale model building.

“In the end, I had no time to assemble it,” said Wong in a Facebook photo in December, showing an opened Gundam box with the pieces still intact in their plastic frames.

On Tuesday, however, Wong unleashed his inner otaku—nerdy Japanese anime enthusiast—by uploading a Facebook photo of a fully assembled Gundam figure with the caption: “Please set your GP base.”

Wong may have allowed himself a break, but the anti-Occupy, pro-Beijing, “blue ribbons” still have their eye on him.

The Alliance in Support of Our Police Force posted to Facebook a picture of Islamic State of Iraq and the Levant (ISIL) hostages with faces of leading pro-democracy figures—Wong, Alex Chow, media mogul Jimmy Lai, “Long Hair” Leung Kwok-hung, and others—cropped in.

“Have a laugh,” said the blue ribbon group, and its members left comments like “I wish they would all die,” “execute all of them,” and “if they are executed, Hong Kong will have 20 years of stability.”

With ISIL—a radical Islamic group that has been designated a terrorist organization by many countries—recently threatening to kill two Japanese hostages, the “joke” is clearly done in bad taste.

“Those who make a joke out of ISIS are even worse than the terrorists,” said one Chan Siu Tung.