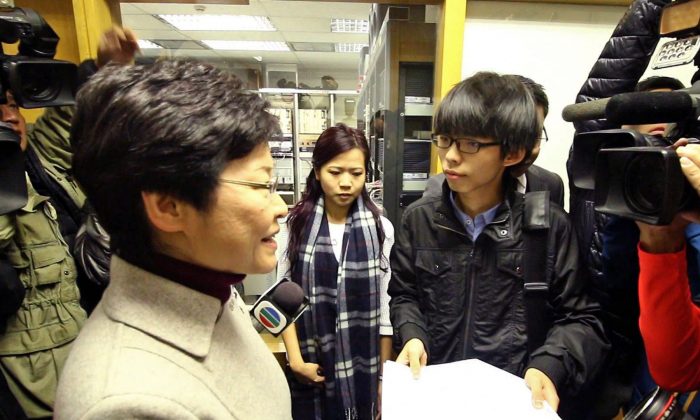 Joshua Wong used the Hong Kong junior high grading guide to assess the government’s report on the protests, and found the report wanting.

In a Facebook post Thursday, the most familiar figure of the pro-democracy Umbrella Movement called the 217-page long “Report on the Recent Community and Political Situation in Hong Kong” a “copy and paste report” that doesn’t measure up to an Independent Enquiry Study—a Hong Kong junior high project—report.

And because the government didn’t offer anything new aside from repeating and backing Beijing’s Aug. 31 decision–Hongkongers can elect their city’s top leader by universal suffrage but the Chinese regime has the final say on who takes office—Wong says it reflects the authorities’ “low level of analysis” and “narrow conclusion.”

Going by the junior high teachers’ marking guide, Wong added, the Occupy Report deserves “1 to 3 points, if is to get any at all.”

In grading the Occupy Report—which comprises largely of summaries of events that took place between Aug. 31 and Dec. 15—Wong is likely taking his cue from Lester Shum, the deputy leader of the Hong Kong Federation of Students. Shum told the press on Tuesday that the government’s report is comparable to a school student’s news clippings and magazine collection.

Pro-democracy protesters are furious with the lackluster Occupy Report because it was meant to be a “sentiment report” bearing the genuine feelings of Hongkongers towards Beijing’s proposed reforms. In fact, it was the Aug. 31 decision that agitated pro-democracy supporters and triggered the Umbrella Movement on Sept. 28.

Earlier on Thursday, Wong ran into Hong Kong’s no. 2, Chief Secretary Carrie Lam, at the Commercial Radio offices. Both Lam and Wong were scheduled guests for a political affairs radio programme.

During the brief meeting, Wong tried to, and apparently succeeded, in passing Lam his copy of the junior high liberal studies marking guide after he expressed roughly the same points which he would later make on Facebook.

According to the South China Morning Post, although Wong pushed Lam to explain why the Occupy Report concluded that it was the “common aspiration” of Hongkongers as well as the Chinese regime and Hong Kong government to see the controversial Aug. 31 decision adopted, Lam, who had been replying Wong with the official line, seemed reluctant to respond. Lam left shortly to appear on the radio show after a Commercial Radio staff’s prompting.