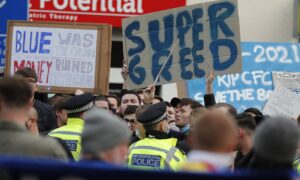 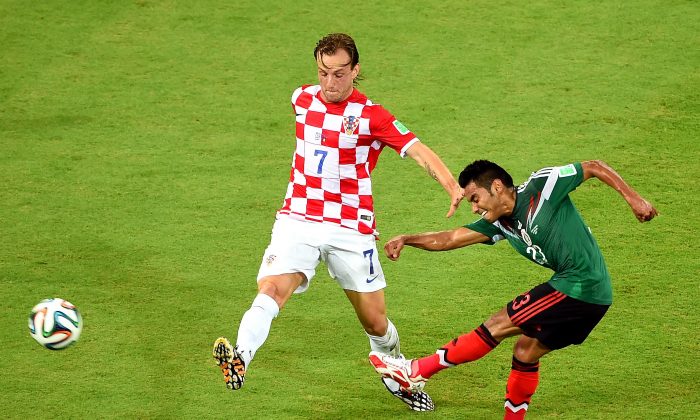 Ivan Rakitic of Croatia and Jose Juan Vazquez of Mexico compete for the ball during the 2014 FIFA World Cup Brazil Group A match between Croatia and Mexico at Arena Pernambuco on June 23, 2014 in Recife, Brazil. (Photo by Laurence Griffiths/Getty Images)
Soccer

José Vázquez received a yellow card for fouling a Croatia player in the 66th minute.

Vázquez is set to miss the next game because this is his second yellow card in consecutive matches.

RIO DE JANEIRO (AP) — Monday signals the start of four days of make-or-break matches at the World Cup, with teams either advancing to the second round or booking their flights home.

Four games will be played every day, with each group playing its last two games simultaneously.

All 32 teams are in action. Some have already qualified for the last 16, while others know they are playing their last match in Brazil.

That’s certainly the case for Monday’s first pair of matches.

The Netherlands and Chile meet to decide which of these already qualified teams finishes top of Group B, while defending world champion Spain and Australia are playing only for pride.

Group winners are rewarded by playing the runner-up — in theory, a weaker opponent — from another group in the second round.

By contrast, competition in Group A is live, with only Cameroon already out of contention.

Host nation Brazil only needs a draw against Cameroon to be sure of advancing, while Croatia and Mexico meet for a winner-takes-all match.

ROBBEN IN, VAN PERSIE OUT

Arjen Robben, who scored twice in the 5-1 rout of world champion Spain, will be the player to watch when the Dutch go looking for at least a draw against Chile to seal top spot in Group B.

His pace and dribbling are among the very best in the business, with his trademark move being to cut in from the right side and then shoot with his left foot.

However, Robben will have to manage without his usual partner up front, Robin van Persie, who is serving a one-match suspension. Center back Bruno Martins Indi has also been ruled out with a concussion.

For Chile, the team’s star midfielder Arturo Vidal has said he is fit to play, following a combination of knee surgery last month and a right Achilles tendon injury picked up in the tournament.

He had to be substituted in both group games to date.

It’s still hard to believe the team that won Euro 2008, the 2010 World Cup and Euro 2012 has been bundled out of contention after just two games in Brazil.

Spain’s exit is set to herald the end of a few international careers — David Villa has already announced his retirement — and a younger generation is ready to come through. That could begin on Monday with a starting role for 22-year-old midfielder Koke.

Australia will be without its inspirational forward Tim Cahill, whose superb volley in a 3-2 loss to the Netherlands is still a candidate for goal of the tournament. Cahill is suspended, while midfielders Mark Bresciano and Mark Milligan are unlikely to be fit.

Australia coach Ange Postecoglou was upbeat on Sunday. “We’re very, very motivated,” he said. “Our goal is to put our best performance at this World Cup in tomorrow’s game.”

A draw will put the hosts through against Cameroon, but the home fans will expect nothing short of a comprehensive victory by Brazil against a Cameroon side that will play no further part in the tournament.

Cue Neymar, the talismanic striker whose 22-year-old shoulders are bearing the hopes of a nation.

Neymar scored twice in the opening 3-1 win over Croatia and came close to breaking the deadlock in a 0-0 draw with Mexico.

Expect more from him Monday, as Brazil needs a victory to finish top of the group and play the loser of the Group B showdown between the Netherlands and Chile in the last 16.

Cameroon’s veteran striker Samuel Eto’o has failed to fully recover from a knee injury and will not start. According to coach Volker Finke, his players are determined to leave the tournament with their “heads high.”

However, after Benoit Assou-Ekotto head-butted teammate Benjamin Moukandjo in their last match, Finke refused to say whether either will play.

MODRIC’S MOMENT? Mexico can afford the luxury of a draw against Croatia and still secure a place in the second round of the World Cup. For Croatia, only a victory will do and the player most likely to engineer one is Real Madrid playmaker Luka Modric.

His passing and shooting abilities are similar to those of Italy’s Andrea Pirlo, and the teammate he will be looking for is Mario Madzukic. The Bayern Munich striker scored twice in a 4-0 win over Cameroon, having been suspended for the team’s opening loss to Brazil.

Their challenge will be to find a way past the tournament’s standout goalkeeper, Guillermo Ochoa.

If Ochoa repeats the heroics he produced in Mexico’s goal-less draw against the tournament host, neither of Croatia’s target men will have any joy.