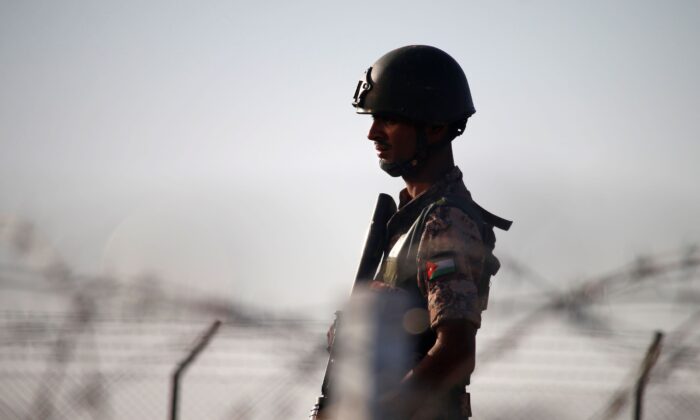 A Jordanian soldier keeps watching at the border between Syria and Jordan, near the town of Nassib, Syria, on July 2, 2018. (Mohamad Abazeed/AFP via Getty Images)
Middle East

AMMAN, Jordan—Jordanian soldiers killed 27 armed smugglers with a large quantity of amphetamines on Jan. 27 as they tried to cross the border from Syria during a dawn snowstorm, an army spokesman said.

Others also carrying drugs fled back into Syria during the attempted crossing, one of a growing number of such incidents over the past year—many involving firefights—that have prompted the army to toughen its rules of engagement with smugglers.

Several others among the smugglers, who were “supported by other armed groups,” were wounded, the army said in a statement. It didn’t specify where along the border the incursion took place.

Many smugglers have favored Jordan’s main border crossing to the Persian Gulf region, where the army has found drugs hidden in Syrian trucks, most commonly an amphetamine known as Captagon.

Jordanian officials say Lebanon’s Iran-backed Hezbollah group and militias, which control much of southern Syria, are behind the surge in smuggling and support the smugglers’ operations. Hezbollah has denied the accusations.

Syrian authorities have announced several major interceptions of drugs destined for Gulf markets in recent months and say they’re cracking down on domestic production of Captagon.