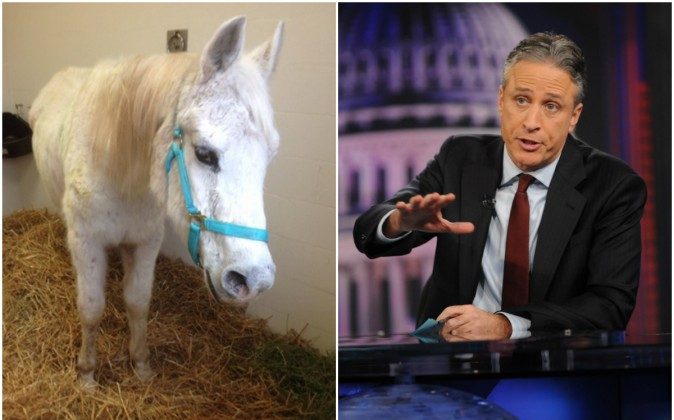 Lily, a white mare, left, is being adopted by Jon Stewart, the ex-host of the 'Daily Show.' Lily was found in a sales stable in Lancaster, PA, shot by nearly 130 paintballs. (NBC and AP Photo/Brad Barket)
Animals

Lily, a 20-year-old Arabian/Appaloosa white mare, was found abandoned at a sales stable in Lancaster, Penn., in March. The mare was suffering from bruises, among other health problems, from being shot by nearly 130 paintballs.

Jon Stewart, the former host of the ‘Daily Show,’ will be Lily’s new owner, according to an ABC27 report.

On May 13, the Lancaster County Society for the Prevention of Cruelty to Animals confirmed Stewart’s adoption.

Lily appeared malnourished when she was discovered. She was nearly blind and was covered with paintball splatter. Kelly Smith, who found the horse, said some of the bruises were inches from Lily’s face.

A Rhode Island man, Philip Price Jr., was convicted on May 13 for the mishandling of the horse and the for the condition she was in, ABC reported.

Citing officials, ABC said that the 65-year-old was found guilty of three counts of animal cruelty for neglecting the horse and two other counts for transporting her and offering her for sale. He was ordered to pay more than $3,000 in fines and over $10,000 for her recovery and care.

It is unclear where the paintball markings came from.

Since being found, Lily’s health has improved and she has regained weight.

“Oh my God, she’s phenomenal,” Kelly Smith said of the horse on May 13, according to LancasterOnline. “You wouldn’t recognize her, she’s a different horse.”