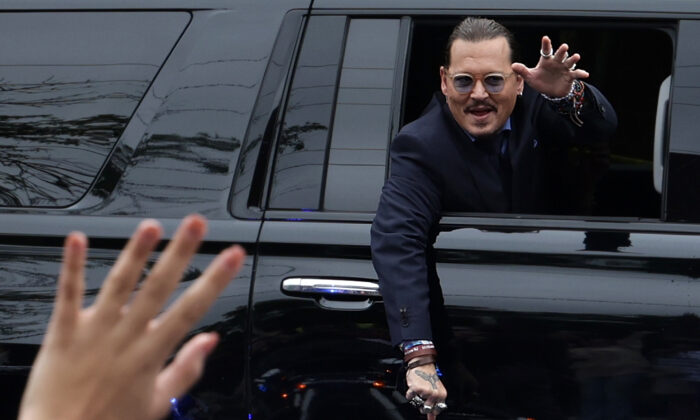 Actor Johnny Depp waves to supporters from his vehicle as he leaves a Fairfax County Courthouse in Fairfax, Va., on May 27, 2022. (Alex Wong/Getty Images)
Entertainment News

Actor Johnny Depp made a surprise appearance at a concert in the United Kingdom on Sunday night as he awaits the verdict in his $50 million defamation case against ex-wife Amber Heard.

Depp, 58, took to the stage in Sheffield with rock guitarist Jeff Beck, who is touring the country, on Saturday night. He then returned to the stage at London’s Royal Albert Hall on Sunday, Deadline reports.

“He came knocking on my dressing room door about five years ago and we haven’t stopped laughing since,” the guitarist said. “We kept it quiet for obvious reasons but here he is.”

Depp can then be seen walking on stage before the pair begin playing their 2020 collaboration “Isolation,” a remake of the song John Lennon released in 1970.

Back in April, Beck said that he and Depp had been working together on music for some time and had recorded a song together in the studio last year.

“You’ll be hearing more from Johnny and me in a little while but until then we hope you find some comfort and solidarity in our take on this Lennon classic,” Beck said in a statement posted to Instagram at the time.

The “Pirates of the Caribbean” star’s appearance on stage comes as the jury began deliberations on Friday in his case against Heard as the televised six-week trial neared its end.

Depp sued ex-wife and actress Heard in Virginia for $50 million, arguing that she defamed him when she called herself “a public figure representing domestic abuse” in an opinion piece she wrote that was published in The Washington Post in 2018.

The piece did not name Depp as an alleged abuser, however, Depp’s lawyers argue that it was clear that Heard was referencing him.

Heard, 36, has countersued for $100 million, saying Depp smeared her when his lawyer branded her abuse accusations a “hoax.”

The seven-person jury deliberated for more than two hours on Friday. They are expected to resume deliberations on Tuesday following the Memorial Day holiday.

Depp has denied hitting Heard or any woman and instead claims that she was the one who exerted violent behavior in their relationship.

“We ask you to give Mr. Depp his life back by telling the world Mr. Depp is not the abuser Ms. Heard says he is,” Vasquez said.

Attorneys for Depp also say that Heard’s allegations of abuse, including sexual abuse by her ex-husband, have ruined Depp’s reputation in Hollywood and among fans.

Heard lawyer Benjamin Rottenborn, in his closing argument, pointed to explicit text messages from Depp to friends or associates, including one in which the actor stated that he wanted Heard dead.

“This is a window into the heart and mind of America’s favorite pirate,” Rottenborn said. “This is the real Johnny Depp.”