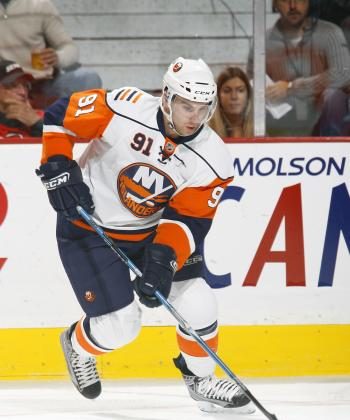 Back to Reality for Tavares and Islanders

By Rahul Vaidyanath
Print
The New York Islanders were pounded 5–1 in Montreal at the hands of the Canadiens on Thurday night. The Wednesday night memory of the Islanders' first win of the season and John Tavares’ shoot-out winner are long gone and reality is back.

That reality is that the Islanders are still one of the weakest teams in the NHL. They took two minor penalties for having too many men on the ice, coughed up the puck repeatedly, and with a young and inexperienced squad, were easy pickings for a struggling Canadiens team.

Montreal had just snapped a five-game losing streak on Tuesday night and were struggling to score goals, averaging just over two per game coming into Thursday night. The win was the first for Montreal this season in regulation time.

A former Islander, defenseman Marc-Andre Bergeron, had a goal and an assist for the Canadiens. The Quebec native got both his points on the power play.

First overall draft pick John Tavares had a poor outing, finishing with a -2 plus/minus rating and no shots on net. He has, however, had a good start to the season with seven points in his first seven games.

Josh Bailey, drafted ninth overall last year by New York, scored the only goal for the Islanders. His short-handed goal, early in the third period, was his first of the season.

The Islanders return to Long Island to face Ovechkin and the Capitals Saturday night and, in an oddity in the schedule, return to Montreal to face the Canadiens again next Monday night.