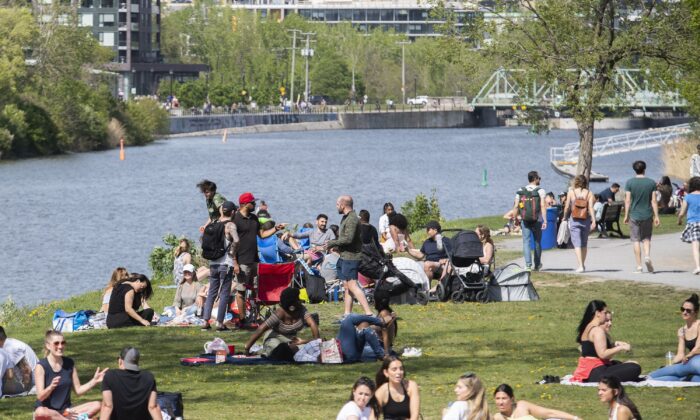 People gather next to the Lachine Canal in Montreal in a file photo. (The Canadian Press/Graham Hughes)
Viewpoints

Nothing, not even maple syrup, can rival the cottage as a Canadian icon. But lately our love affair with nature is becoming a bit of a non-country song because we overwhelmingly live in big cities where a sterile monocultured lawn is as green as it gets. And when you try to put kids back in touch with real trees, lakes, birds, and bugs instead of this abstract “viyerminn” teachers keep urging them to save from capitalism, guess what.

Before I tell you, I should concede that stupid things have always happened where humans are involved. Some are funny, some tragic, and some both. (Once again, with Chesterton, I insist that the opposite of “funny” isn’t “serious,” it’s “not funny.”) Had I been reading the Stirpes Nationalis around the time Caesar was gasping out his last convoluted quip to Brutus, or Elagabalus setting tongues wagging, I would doubtless have gone O tempora o mores with the optimes. But I would have been right that some small, silly, infuriating items really do indicate large and ominous trends.

So off to our tent city. Or (Canada being diverse, bilingual, and all that sait porter stuff), our ville de tente. See, the government was trying to give camping lessons in Montreal, already silly and ominous since nothing in the recent performance of public authorities in Canada inspires me to let them help pitch even my modern tent let alone our old green canvas beast.

In any case, Parks Canada ventured into the heart of the lack of wilderness to offer people what it thinks it knows of basic camping skills along Montreal’s Lachine Canal for a mere $108.75 per tent. And what could go wrong, you ask, other than tripping on a peg line, one of those shiny lightweight carbon-fibre poles snapping, or someone’s paddle going up the canal?

Ha. Lots. And not bears getting into the food, a marshmallow bursting into flames, or dad having to unhook a fish without impaling his own thumb and looking confident the whole way. No. The woke show up and put out the fire.

Specifically, some perpetually outraged activist, to repeat myself, “said the initiative comes off as a bad joke as the city’s authorities frequently dismantle encampments for the homeless erected on public land,” according to The Canadian Press. In keeping with their signature tune “that’s not funny,” the activist said, “I laughed out of despair when I saw that.” These people don’t do amusement, do they?

Which brings me to a Thomas Sowell quotation that despite being popular online turns out to be legitimate: “Historians of the future will have a hard time figuring out how so many organized groups of strident jackasses succeeded in leading us around by the nose and morally intimidating the majority into silence.” Good question.

If you asked a random collection of Canadians, from traditionalists raised on the cry of the loon to newcomers who have yet to sing or live the Blackfly Song, whether they’d rather have their kid in a Parks Canada camping program or a homeless addict tent city, they would not have difficulty detecting the difference or indicating a preference. Whereas the activists are going with the squalor and, probably, pushing to have it renamed the Fly of Colour Song. And the politicians and chattering classes lack the courage or will to say buzz off.

In a profile in manque de courage, the mayor of Montreal punted, saying it was up to Parks Canada. Instead of sneering, news outlets used the latest woke neologism “unhoused people.” And Parks Canada collapsed its own tent, cancelling the first event without explanation. At press time three more were still listed, so there’s hope. But also ridicule and anxiety.

Annie the Activist said “C’est insultant et ironique,” and the outlet that quoted her also unearthed a doctoral candidate in community health to, of all things, agree with her. But what’s insulting and ironic is various governments funding people who can’t tell legal from illegal activity.

It would be like not knowing the difference between using a hammer to build a permitted house on your own property and to demolish someone else’s as a mob. But what if they do? What if they know a structured, authorized program designed to help people build a more healthy lifestyle from random occupation of public space by people in crisis who, squatting in filthy tents, intimidate others while continuing their own downward spiral?

What if, given the transvaluing of all values that’s “in” nowadays, they do know and prefer the latter? It is surely revealing that our activist wanted the camping program dismantled and the tents given to organizations like hers to use to foment disorder and undermine public health. And the people “in charge” gave in.