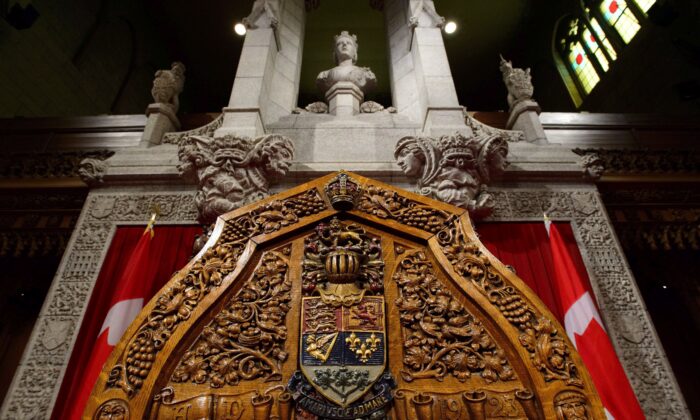 The Senate is pictured on Parliament Hill in Ottawa on Nov. 13, 2018. (The Canadian Press/Sean Kilpatrick)
Viewpoints

John Robson: Critics of Constitutional Monarchies Should Be Careful What They Wish For

Before the tributes to Queen Elizabeth II were even done, there were those who swooped in with calls for Canada and other realms finally to become republics, and worse. To which I say be careful what you wish for.

In two ways. First, there were some mind-bogglingly offensive statements on Her Majesty’s passing, including from people whose ancestors, or they themselves, escaped awful places for the Anglosphere, the foundations of whose freedom, prosperity, and toleration they seem neither to understand nor appreciate. For instance, one who on NBC said Elizabeth “was heir to, and in turn passes on, a chain of rule defined by the brutality of the British Empire as it conquered and exploited people around the world.” Can any sane person wish Britain had been governed like Iraq, or by it? Does even that author wish he’d lived under Saddam Hussein or Muqtada al-Sadr?

Then some privileged academic snarled in The New York Times that “the queen helped obscure a bloody history of decolonization whose proportions and legacies have yet to be adequately acknowledged” and included in “the crimes committed in her name” fighting communists in Malaysia. She also praised Lord Mountbatten’s assassination as “karmic” (as for his grandson, the teenage deckhand and that old lady also killed, well, you can’t make an omelette without breaking eggs). She even denounced the Queen for being “a white face on all the coins, notes and stamps circulated in a rapidly diversifying nation.” Elizabeth’s Britain welcomed people from around the world. What more did you want her to do? Have a face transplant?

Still, last place goes to Uju Anya, professor of “critical race and discourse studies” at private Carnegie Mellon University where undergraduate tuition exceeds US$58,000 a year, who tweeted: “I heard the chief monarch of a thieving raping genocidal empire is finally dying. May her pain be excruciating.” (Which prompted MSNBC’s “Uju Anya’s tweet shouldn’t have been condemned by Carnegie Mellon” and Newsweek’s “Carnegie Mellon Students Back Uju Anya for Wishing Queen Painful Death”.) Ghastly.

Was British colonial rule sometimes arrogant, bigoted, and harsh? Of course. No institutions have ever been found that abolish the less attractive human qualities. And the British Empire didn’t just engage in the slave trade, it spread that dreadful institution in the Caribbean and then North America. But the system that evolved in Britain has been far more successful at constraining human failings than any other. Including the Empire repenting, abolishing slavery internally, and even sending the Royal Navy to stamp out the trade elsewhere, all before Victoria took the throne, never mind Elizabeth.

Does anyone really suppose indigenous Nigerian authorities were going to abolish slavery spontaneously? Or Iraqi, Russian, or Chinese? The indictment of the Empire is that it did not always live up to its ideals. But the indictment of most regimes is that they almost always did.

Hence the second way critics of our monarchy should be careful what they wish for, namely taking care to grasp what “republic” means.

Here I quote the Percies’ defiance to Henry IV in 1403. Their cause was wrong, but their language incorporated shared understanding across partisan lines: “we send mortal diffidatio to you and your accomplices and allies, as traitors and destroyers to the respublica of the realm.”

Respublica? In the Middle Ages? Yes, because as John Adams put it a quarter millennium later while defending it, republic means “a government of laws, and not of men.” Thus 500 years earlier, half a century before Magna Carta, John of Salisbury in Policraticus wrote: “The difference between the prince and the tyrant is that the prince obeys the law and governs his people in accordance with right.”

Exactly. What Canadians have had, since long before Canada, is a republic anchored in constitutional monarchy. Imperfect, to be sure. But attentive to its imperfections, a vital way it vastly outperforms alternatives, historical and theoretical.

Suppose we heed the projectors and haters, anyway. We’d end up choosing between Justin Trudeau and Pierre Poilievre as head of state and emblem of Canada instead of just head of Executive Branch operations, with no institution above partisanship able to call out gross breaches of decency.

Or electing a ceremonial president nobody can remember with no moral authority. Or having prime ministers appoint governors general who appoint prime ministers in a self-serving clique who resemble one another in unattractive ways. And for what?

What harm did constitutional monarchy ever do us? What has the Canadian political class wanted to do, with popular support, but could not because our Queen, or some King, said no?

If you entrust power to people who don’t even realize we already have a republic whose “effective and dignified parts” worked well together for centuries, it will fall apart. And if you entrust it to people who publicly desire agonizing deaths to adversaries, you may be confident they will occur.

So be very careful what you wish for.