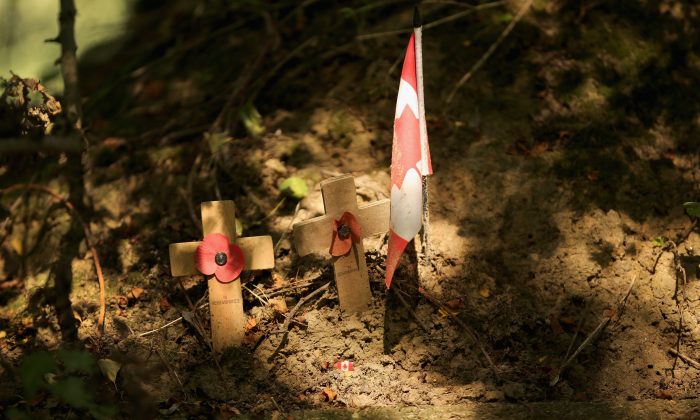 Memorial crosses and a Canadian flag sit in the ground near the dressing station in Ypres, Belgium, where Lt.-Col. John McCrae treated the wounded and composed his famous poem “In Flanders Fields” after burying his friend. On Nov. 6, 2014, a plaque will be unveiled in Guelph honouring McCrae, whose famous World War I poem became the inspiration behind the Remembrance Day poppy. (Christopher Furlong/Getty Images)
Canada

John McCrae, Author of ‘In Flanders Fields,’ Honoured in His Hometown

The Ontario Heritage Trust’s plaque commemorating Lt.-Col. John McCrae, author of “In Flanders Fields,” will be unveiled on Nov. 6 in Guelph, where the physician, soldier, and poet was born.

McCrae wrote his poem in 1915 during the Second Battle of Ypres, Belgium, in an area traditionally called Flanders. Many Canadian soldiers lost their lives during the devastating battle, including one of McCrae’s closest friends. The soldiers were buried in makeshift graves with wooden crosses, with wild poppies blooming between the graves.

At the time, McCrae was serving as a major and surgeon with the First Brigade, Canadian Field Artillery. He penned the iconic poem the day after the battle as he waited for the wounded to be brought to his medical post for treatment.

The poem was published in England’s Punch magazine, and soon became the most popular poem of the war, making its creator likewise well known throughout the British Empire and the United States. It was used in war bond campaigns to raise funds, and became the inspiration behind the poppy used as the flower of remembrance in Canada, the UK, Australia, and other commonwealth countries.

Born in Guelph, Ont., on Nov. 30, 1872, McCrae began writing poetry at a young age. He was also interested in the military from an early age, and joined the Highfield Cadet Corps at 14.

He received his medical degree from the University of Toronto in 1898, and about a year later went to fight in the Boer War in South Africa. He left the military in 1904 and focused on his private practice, while also working as a university lecturer.

But when the Great War broke out in 1914, McCrae felt it was his duty to join the war effort. He was first stationed in Ypres operating a field hospital, then later transferred to the No. 3 Canadian General Hospital in France where he was chief of medical services.

In January 1918 McCrae became very ill, and later that month died of pneumonia and meningitis. On the day he fell ill, he learned he had been made consulting physician to the First British Army—the first Canadian to be appointed this role.

McCrae was buried with full military honours in Wimereux Cemetery not far from the fields of Flanders. His beloved horse Bonfire led the funeral procession, with McCrae’s riding boots reversed in the stirrups.

The commemoration service on Nov. 6 will feature a video address by noted Canadian historian Jack Granatstein and a reading of McCrae’s poem by cadets.

On Nov. 11, the plaque will be dedicated to the John McCrae Public School during the school’s annual Remembrance Day ceremony, after which it will be installed at its permanent location at the entrance gates to the John McCrae Memorial Gardens and Cenotaph.

Last month, it was also announced that McCrae will be posthumously inducted into the Canadian Medical Hall of Fame.