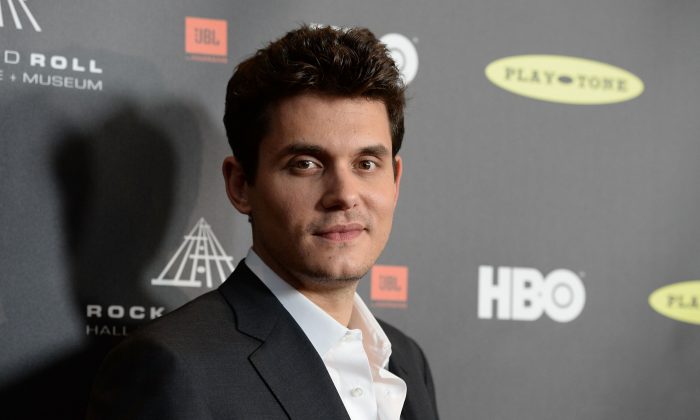 John Mayer and Taylor Swift had a romance in 2009, from which the left-over resentment poured out in a 2010 Taylor Swift song, “Dear John.” Mayer’s song, “Paper Doll” seems to reference Swift, though he dodged questions about the connection on the Today show Friday.

“Songwriters write songs because of people, about people,” Mayer said when asked by Today co-host Willie Geist if “Paper Doll” refers to someone in particular. Mayer added: “Anything someone else wrote is their reception of a song. I don’t get involved in it. It’s none of my business.”

Swift told Chris Willman of Our Country that her album Speak Now, featuring “Dear John,” is a sort of diary detailing her relationships of the two years preceding it’s 2010 release. “They’re all made very clear,” Swift said. “Every single song is like a roadmap to what that relationship stood for, with little markers that maybe everyone won’t know, but there are things that were little nuances of the relationship, little hints. And every single song is like that. Everyone will know, so I don’t really have to send out emails on this one.”

Mayor reacted to the song, “Dear John,” in an interview with Rolling Stone magazine. He said he hadn’t heard about Swift’s feelings from her, rather he’d heard about them directly from that song. “I never got an e-mail. I never got a phone call,” he told Rolling Stone in June 2012. “I was really caught off-guard, and it really humiliated me at a time when I’d already been dressed down. I mean, how would you feel if, at the lowest you’ve ever been, someone kicked you even lower?”

Swift sings: “Dear John, I see it all, now it was wrong / Don’t you think 19 is too young to be played by your dark twisted games, when I loved you so?”

Swift, who is now 23, but was 19 when she dated Mayor, sings “Don’t you think I was too young to be messed with?” Mayor, now 35, declined to comment to Rolling Stone on this line. He is currently dating Katy Perry, 28.

In the chorus of “Paper Doll,” Mayer sings: “You’re like 22 girls in one/ And none of them know what they’re running from/ Was it just too far to fall for a little paper doll?”

US magazine points out the possible reference here to Swift’s single, “22,” released earlier this year, and to the line in “Dear John,” “I’ll look back and regret how I ignored when they said run as fast as you can.”

In a verse, Mayer sings: “Dress of gold and blue /Sure was fun being good to you.”

E! Online links this line to the “Dear John” lines: “Dear John, I see it all now that you’re gone / Don’t think I was too young to be messed with? / The girl in the dress cried the whole way home.”