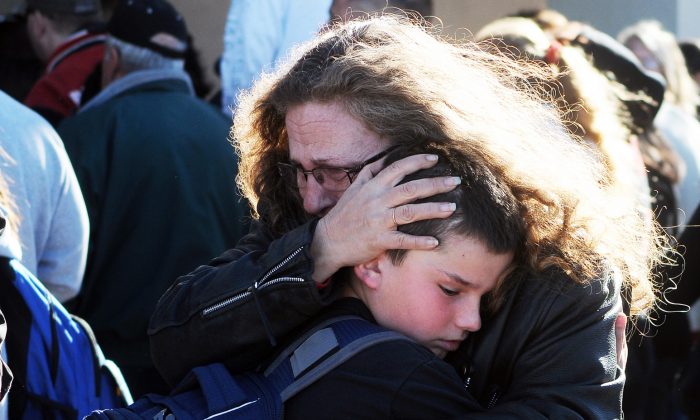 A woman hugs a student at a staging ground set up at the Roswell Mall following a shooting at Berrendo Middle School, Tuesday, Jan. 14, 2014, in Roswell, N.M. A shooter opened fire at the middle school, injuring two students before being taken into custody. (AP Photo/Roswell Daily Record, Mark Wilson)
Crime and Incidents

John Masterson, a teacher at Berrendo Middle School in Roswell, New Mexico, has been identified as the teacher who talked a 12-year-old shooting suspect into dropping his gun.

Masterson had his back to the shooter when he heard a gunshot, an official told reporters at a Tuesday night press conference. Masterson thought the first gunshot was a firecracker, though it hasn’t been confirmed that there’s been more than one shot.

Masterson turned around and saw the shotgun pointed at him. He talked the suspect, who was identified by the Albuquerque Journal as Mason Campbell, into dropping the gun.

Masterson then “put the suspect” against the wall, the official said, until police officers arrived on the scene.

New Mexico Gov. Susana Martinez said at a vigil on Tuesday night that Masterson “was a hero … who stood there and allowed a gun to be pointed right at him. and to talk down that young boy to drop the gun so that there would be no more young kids hurt,” according to CNN. Masterson is an eighth-grade social studies teacher.

Albuquerque attorney Robert Gorence, who is representing the suspect, said that the boy’s family will issue a statement on Wednesday.

Campbell was reportedly transferred to a psychiatric hospital.