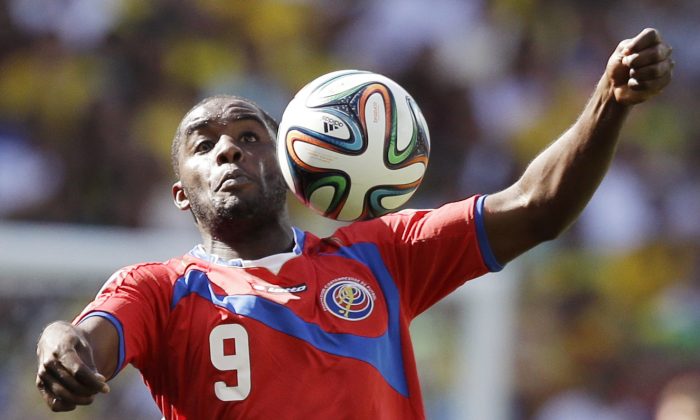 Joel Campbell will return to the Emirates next season.

The 22-year-old has played excellently at the World Cup so far, notching one goal and one assist for the Los Ticos.

BBC reports that Arsenal boss Arsene Wenger has told Campbell to report back for pre-season.

Campbell has insisted that his dream is to play for Arsenal, according to Metro, so his non-transfer will certainly be good news for him.

RIO DE JANEIRO (AP) — At this point in the World Cup, the Dutch know plenty about Costa Rica — once one of the surprise packages of the tournament. What they may not have heard is that Costa Rica’s Jorge Luis Pinto learned his coaching from the Dutchman who invented ‘total football.’

Pinto, a well-traveled Colombian, studied at the University of Cologne early in the 1980s when Dutch coach Rinus Michels was coaching the city’s Bundesliga club.

“In those years I spent my time watching him training and talking to him,” Pinto said. “When I didn’t have classes, I went to see the club practice. I saw many things and learned a lot.”

Michels was a good teacher — a few years later he would lead the Netherlands to its one and only international title, the 1988 European Championship, having pioneered the ‘total football’ approach — where players can change their positions during a game.

Now Pinto aims to stop the Dutch taking another step toward their first world title when his Costa Rica team meets the Netherlands on Saturday in the quarterfinals at Salvador’s Arena Fonte Nova.

It is not only Pinto who knows the Dutch game well. Bryan Ruiz had a successful spell with FC Twente before joining Fulham and now plays at PSV Eindhoven alongside likely Netherlands starter Georginio Wijnaldum and super-sub Memphis Depay.

Ruiz said he has shared what he knows about the Dutch players with his coach.

“Pinto asked me about it and I provided a bit of analysis of the ones I know,” he said Thursday.

“I haven’t had any contact with Memphis or Georginio,” he added. “Of course, the day of the match, we will greet each other, chat a bit and then get focused.”

Ruiz has teamed up with a strong, fast-paced striker in Joel Campbell, propelling Costa Rica to the surprise top spot in a Group D that also included England, Italy and Uruguay. Pinto’s team also has a miserly defense that has conceded just two goals in the tournament so far.

“Costa Rica has a very good team,” in-form Dutch forward Arjen Robben said. “I think before not a lot of people would have expected them to go through to the next round but I think they are a very strong team and it’s going to be another very difficult game for us where we have to give everything to go through to the semi-finals.”

Not surprisingly, Costa Rica will be attempting to shut down the Dutch striking partnership of Robben and Robin van Persie, who are looking to get back on the scoring sheet after combining for six goals in their team’s first two matches but failing to find the net since.

“We just can’t afford to give them any room to maneuver,” midfielder Celso Borges said. “They can make you pay if they get an opening.”

The winner in Salvador goes on to a semifinal against either Belgium or Argentina in Sao Paulo on July 9.

Costa Rica will be without defender Oscar Duarte, who was sent off in the 66th minute of the penalty shootout victory over Greece. Goalkeeper Keylor Navas skipped training on Wednesday with a sore shoulder, but he has been declared fit to play.

The lengthening Dutch injury list is creating problems for coach Louis van Gaal, who is fast running out of fit midfielders.

AC Milan strongman Nigel de Jong may have played his last World Cup match in Brazil after tearing a groin muscle early in the second-round defeat of Mexico. Leroy Fer also is in doubt with a hamstring injury he picked up in training the day after scoring the crucial opening goal in the Netherlands 2-0 defeat of Chile.

Van Gaal could push left back Daley Blind from defense to midfield or opt for Feyenoord’s Jordie Clasie, who has yet to play in Brazil and has only eight caps to his name.

Van Gaal’s most experienced midfielder, Wesley Sneijder, appears to be running into form at just the right time.

The team’s top scorer in South Africa four years ago broke his Brazil duck against Mexico with a sizzling drive in the 88th minute, after substitute Klaas Jan Huntelaar had headed the ball back. Substitute Huntelaar then calmly slotted home a stoppage time penalty, but he said the assist for Sneijder was his most important touch.

“That moment was so intense,” he told Dutch website Nu.nl. “It was an explosion of joy and adrenaline that gave us the feeling we could force a result in the regular 90 minutes.”