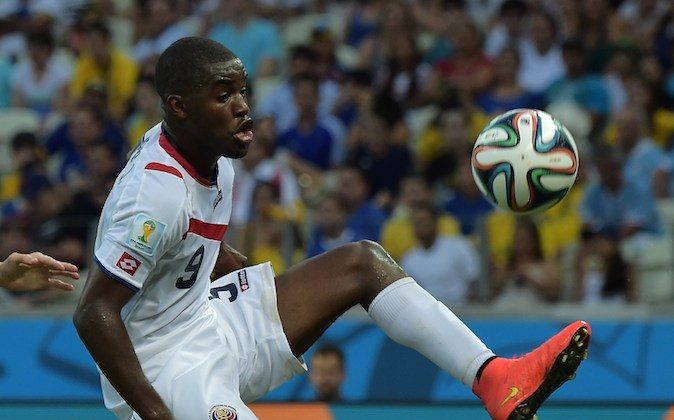 Costa Rica's forward Joel Campbell plays the ball during a Group D football match between Uruguay and Costa Rica at the Castelao Stadium in Fortaleza during the 2014 FIFA World Cup on June 14, 2014. (GABRIEL BOUYS/AFP/Getty Images)
Soccer

Arsenal forward Joel Campbell could be headed to San Siro next season.

AC Milan are keen to take the 20-year-old Costa Rican on loan, should Arsenal wish to follow up on a deal for Mario Balotelli, according to the Daily Mail.

Campbell has impressed while on loan to Olympiakos, and was also instrumental in Costa Rica’s 3-1 victory over Uruguay in World Cup 2014.

On Campbell’s performance against Uruguay, his father, Humberto, told the Daily Mail, “I expect and want to make it known that I have told him this has to be the game for him.”

“When he played against Manchester United [for Olympiakos in the Champions League last season] I told him that it had to be the game to shine, to show the world what he can do”

“He has the football to show in England and this is the time for him to prove it to everybody. I have told him this and that is what he is going to do. What he did against Uruguay, it was incredible”

“I knew he was going to score or do something exceptional, like he did for the third goal. I expected that. I knew it would happen.”

Should Campbell continue to excel in the World Cup, Arsenal boss Arsene Wenger should have a problem keeping his talented youngster at the Emirates.