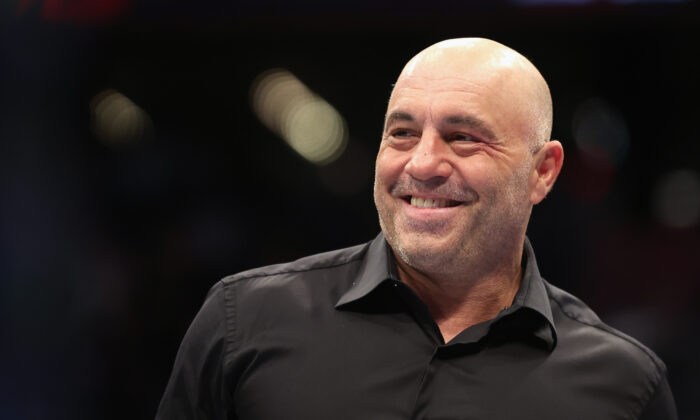 Joe Rogan Warns of TikTok Privacy Issues: ‘It Ends With China Having All of Your Data’

Podcast host Joe Rogan has warned TikTok users about the privacy and safety concerns posed by the Chinese-owned social media platform, saying that ultimately their data end up in the hands of the regime in Beijing.

Rogan said on the latest episode of “The Joe Rogan Experience,” that he had fallen “down a TikTok rabbit hole” reading the company’s lengthy terms of service. “This is so crazy.”

TikTok is owned by Beijing-based ByteDance, and U.S. officials have repeatedly warned that American users’ data may be used by the Chinese Communist Party (CCP), which could pose national security risks.

“Listen to this, this is from TikTok’s privacy policy,” Rogan said. “It said, ‘We collect certain information about the device you use to access the platform, such as your IP address, user region.’ This is really crazy.

“So all your apps and all your file names, all the things you have filed away on your phone, they have access to that,” he said. “‘File names and types, keystroke patterns or rhythms.'”

“So they’re monitoring your keystrokes, which means they know every [expletive] thing you type,” Rogan said.

The host then reeled off a list of more user information that is collected by the short video app, including battery state, audio settings, and connected audio devices.

As stated on TikTok’s privacy policy, the video hosting service uses information including the device ID and user ID to identify user activity across multiple devices to “give you a seamless log-in experience and for security purposes.”

“‘We may also associate you with information collected from devices other than those you use to log into the platform,'” Rogan continued to read.

“Meaning they can use other computers that you’re not even using to log into TikTok,” he said. “They can suck the data off that. That’s what you’re agreeing to when you download and start using TikTok.”

When asked by his guest, podcaster and comedian Theo Von, if he believed TikTok had been created for the sole purpose of gaining such information on users, Rogan replied, “100 percent,” adding that “it ends with China having all of your data.”

Rogan’s comments follow a new survey that indicates nearly 60 percent of Americans believe TikTok should be removed from app stores after revelations that nonpublic U.S. user data have been repeatedly accessed in China.

That poll was conducted by the Convention of States Action and Trafalgar Group, from July 7 to 10 among more than 1,000 likely 2022 election voters; the survey has a margin of error of plus or minus 2.9 percentage points.

Officials have repeatedly warned of the potential dangers posed by TikTok, particularly in light of national security laws in China that compel local companies to cooperate with Chinese intelligence agencies when requested.

TikTok has repeatedly denied such allegations, stating that it stores U.S. user data on servers outside of China and doesn’t and won’t provide the CCP with access to that information.

However, the company appeared to backtrack on that statement following leaked recordings of internal company meetings obtained by BuzzFeed News that allegedly show that ByteDance was repeatedly able to access nonpublic data of U.S. users between September 2021 and January.

“Employees outside the US, including China-based employees, can have access to TikTok US user data subject to a series of robust cybersecurity controls and authorization approval protocols overseen by our US-based security team,” the letter stated.

A TikTok spokesperson said in a statement to BuzzFeed that the platform is “among the most scrutinized platforms from a security standpoint” and that it “aims to remove any doubt about the security of US user data.”

The spokesperson added that TikTok continues to “hire experts in their fields, continually work to validate our security standards, and bring in reputable, independent third parties to test our defenses.”