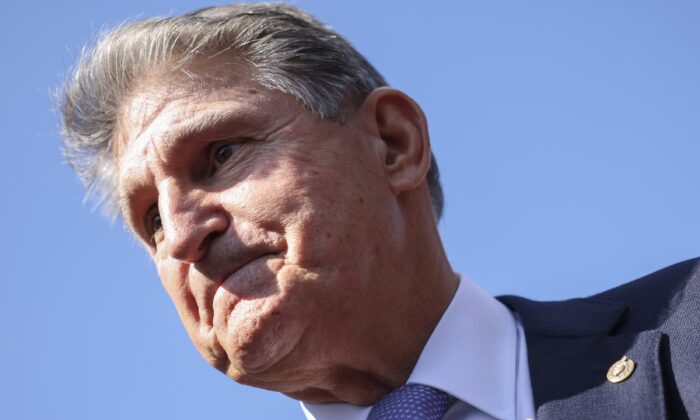 I have been following the various news stories about Sen. Joe Manchin and the White House staff with considerable interest.

It reminded me of an incident in which I was involved with a former West Virginia Senator, the formidable Robert Byrd, and the White House staff of President George H.W. Bush.

We were at Joint Base Andrews engaged in the 1990 budget negotiations. I was there as the House Republican whip. The Democrats were demanding tax increases, and the Bush team was gradually giving ground and preparing to break his “Read my lips, no new taxes” pledge.

I had a little bit of the Manchin role in that I was the one person in the negotiations who was totally opposed to tax increases—and kept saying so. Like Manchin, I was being cheerfully ignored and humored. The theory of the establishment was that as long as I was in the room, I was signaling I would eventually cave and agree to a tax increase.

The fury at my absolute refusal to vote for higher taxes was a little like the attacks Manchin is now getting from the left. I thought I had been clear from the beginning that I would totally oppose a tax increase—and I had a general belief that the Bush White House would maneuver until it found a formula I could support.

Meanwhile, the Democratic leaders pushed for more concessions and got the Bush administration to yield a little ground every week until they reached a deal (that was a clear violation of the no new taxes pledge).

In the middle of those meetings, I watched a scene which was brought back to mind by Manchin’s anger at the White House staff.

Senators have historically been proud and see themselves representing a deep tradition of being virtually the equal of the President. They get to approve presidential nominations to the Cabinet, the Supreme Court, and several thousand executive branch appointees. And they approve or reject treaties.

Since there are only 100 senators, and they are normally referred to by their staffs as “the Senator” (as in “the Senator will see you now”) they are a tight club that cherishes its prerogatives even in the middle of partisan fights.

Sen. Byrd was the most powerful single senator in 1990. He had such reverence for the institution that he delivered a long series of speeches on the Senate floor, which became a remarkable series of books outlining the history of the Senate.

Byrd believed so deeply in the prerogatives of the legislative branch that he came to see me when I was Speaker—to admonish me to quit negotiating with the Clinton administration even though he was a Democrat. His reasoning was that the House and Senate should negotiate and then send their agreement to the President and let him decide whether to sign or veto. In Byrd’s view, I was weakening the power and prestige of the legislative branch as a coequal branch by allowing the President to play a role in writing legislation. His argument was we should write legislation and the head of the Executive branch should say yes or no.

I first saw the depth of Byrd’s intense feeling one evening at Joint Base Andrews. He had participated in the budget negotiations with the understanding that he would get an entire evening to outline the Byrd Plan for solving the budget.

When the time came after dinner for the Byrd presentation, the two senior White House staff in the negotiations ostentatiously showed their disdain. They were slouched down and communicated their boredom and impatient tolerance, so it was impossible to ignore.

Byrd hated staff who thought they were equal to or, horror of horrors, superior to a senator. He stopped speaking. Staring at the two like they were misbehaving seventh graders, he tore into them. If his ideas were not worthy of their attention he was leaving—and with his departure the budget negotiations would collapse. He insisted that they sit up straight, pay attention, and display the right attitude.

As Byrd lectured these two powerful staffers, I was reminded that was just what they were—staffers. They had not won an election. They did not represent a state, a congressional district—or any constituents. They just had small offices in a famous building because the President had appointed them.

They both looked like chastised school boys. They sat up straight and at least seemed to be paying attention for the two-hour Byrd budget presentation.

I suspect the Biden White House staff’s attitude and language must have offended another West Virginia Senator. Sen. Manchin has implied that at least one of them threatened him in a way that no person from the Mountaineer State could tolerate.

Manchin had been warning them for months that the Big Government Socialist was never going to get his vote.

They forgot that Manchin was “the Senator from West Virginia,” and they needed his vote.

They showed their lack of understanding when Manchin announced he would vote against the bill. Their intemperate language and nasty comments, including the statement that Manchin had lied, were about as dumb as it can get.

As Republican leader Mitch McConnell told the media, “the most important vote is the next one” and the Biden White House had just made it a lot harder to get Manchin’s next vote.

The last six months have been an exercise in failing to understand the legislative process and it has crippled the Biden administration’s ability to get things done.