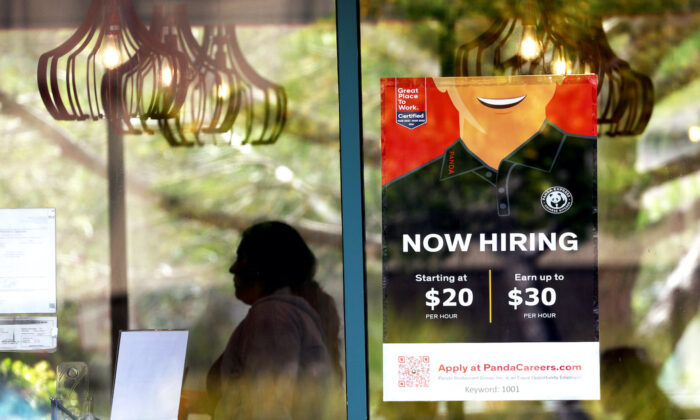 A "now hiring" sign is posted at a Panda Express restaurant in Marin County, Calif., on Aug. 5, 2022. (Photo by Justin Sullivan/Getty Images)
Economy

A newly released jobs report showed that the pace of hiring in the private sector slowed down in August, amid growing fears of an economic slowdown and historically high inflation.

The much awaited monthly report on private sector employment was released by payroll processing firm ADP on Aug. 31.

Payroll numbers at the end of the summer season have been traditionally volatile.

Dow Jones had earlier projected that the ADP report would show 300,000 new hires on the payrolls.

“We could be at an inflection point, from super-charged job gains to something more normal.”

The separate closely watched non-farm payrolls report from the U.S. Bureau of Labor Statistics is expected to come out on Sept. 2, which  is projected to show a job increase of 318,000.

ADP’s calculations differ from the BLS’s numbers by including all employees active in a private company, while the government report measures only those who had been paid that month.

The payroll firm’s jobs report analyses payroll data of more than 25 million U.S. employees to provide a representative picture of the labor market.

It also provides changes to employment in the private sector in the present month, as well as weekly job data from the previous month.

The ADP report comes at a time of the highest rise in prices in more than 40 years, along with two quarters of negative U.S. GDP growth in the first half of the year.

ADP said that it took a break with its monthly report through much of this summer, as it revamped its methodology to calculate employment numbers with its new partnership with the Stanford Digital Economy Lab.

The firm’s new system “captures a new evolution in how we are viewing data at ADP. This is an independent estimate of private sector employment that leverages the full scale and breadth of ADP microdata based on the clients that we work with every single day,” according to Richardson in a press statement.

The payroll firm is now providing monthly wage information, in addition to how it calculates total job information.

ADP looks at almost 10 million employees over a 12-month period in order to calculate monthly changes in wages.

Federal Reserve Chairman Jerome Powell said last week that the U.S. unemployment rate was too low for the amount of open jobs available and that the central bank will continue to raise rates until inflation is under control.

Inflation for July was at 8.5 percent over last year.

ADP’s new methodology also changed how it accounts for random factors such as weather and natural disasters.

Services-related industries accounted for most of the jobs in the private sector this month, with 110,000 new positions.

The leisure and hospitality industry grew by 96,000, with pay increases of 12.1 percent, while trade, transportation, and utilities gained 54,000 new jobs.

Meanwhile, several industries saw declines, such as financial services at 20,000, education and health services at 15,000, and professional and business services at 14,000.

Other sectors like construction saw gains in employment of 21,000 new hires.

The timber, energy, and mining industries saw a jump of 2,000 in new positions, while manufacturing saw flat growth.

Smaller companies with fewer than 50 employees saw a 25,000 jump in employment.