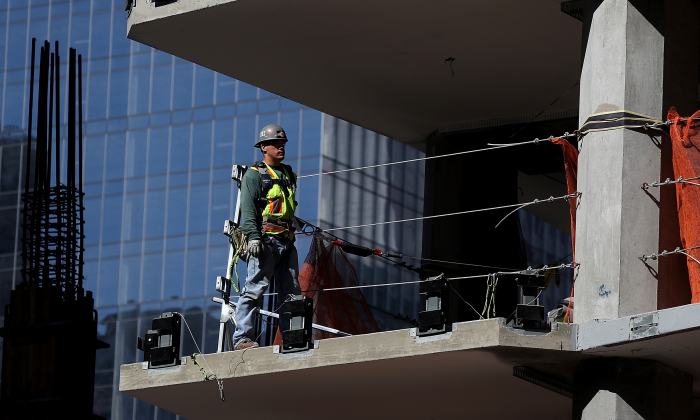 A construction worker stands on a floor of a building under construction on October 5, 2018 in San Francisco, California. (Justin Sullivan/Getty Images)
US News

WASHINGTON–Job openings surged to a record high in December, led by vacancies in the construction and accommodation and food services sectors, strengthening analysts’ views that the economy was running out of workers.

While the release of the Labor Department’s monthly Job Openings and Labor Turnover Survey (JOLTS) on Feb. 12 underscored labor market strength, there are worries the shortage of workers could hurt an economic expansion that has lasted 9-1/2 years and is the second longest on record.

“The labor market continues to heat up,” said Chris Rupkey, chief economist at MUFG in New York. “But growth cannot continue for much longer if there is no one out there to work in the factories and shops and malls across America.”

Job openings, a measure of labor demand, increased by 169,000 to a seasonally adjusted 7.3 million in December, the highest reading since the series started in 2000. That lifted the job openings rate to 4.7 percent from 4.6 percent in November.

Construction vacancies increased by 88,000 jobs in December. There were an additional 84,000 jobs in the accommodation and food services sector. Job openings in the health care and social assistance sector rose by 79,000 in December.

Federal government vacancies, however, fell by 32,000 jobs and job openings in real estate, rental and leasing dropped 31,000 in December.

Hiring continued to lag job openings in December, rising to 5.9 million from 5.8 million in November. That further widened the gap between vacancies and hiring, which emerged in 2015, reflecting tightening labor market conditions. There were 1.2 job openings for every unemployed person in December.

Anecdotal evidence has been growing of companies experiencing difficulties finding workers. A survey of small businesses published Feb. 12 found that almost a quarter of owners reported difficulties finding qualified workers as their “single most important business problem” in January.

According to the survey from the National Federation of Independent Business, 35 percent of small business owners reported job openings they could not fill in January.

The labor market has enjoyed a record 100 straight months of job gains, with nonfarm payrolls increasing by 304,000 jobs in January, the most since February 2018. But as workers become more scarce, job growth is expected to slow to around 150,000 per month this year.

Economists believe the dearth of workers will drive up wage growth, even though the number of workers voluntarily quitting their jobs has remained steady.

“The diminishing availability of workers is expected to lead to more upward pressure on wages, bring more workers into the labor force and induce more companies to find ways to produce and service their customers with automated processes,” said Sophia Koropeckyj, a senior economist at Moody’s Analytics in West Chester, Pennsylvania.

The JOLTS report showed the number of workers voluntarily quitting their jobs was little changed at 3.5 million in December, keeping the quits rate at 2.3 percent for a third straight month. The quits rate is viewed by policymakers and economists as a measure of job market confidence.

There were increases in the number of workers quitting their jobs in professional and business services and in the health care and social assistance sectors. But these were offset by declines in several industries and the government.

“With a labor market this tight, you may expect the quits rate to be going up or at a higher level already,” said Nick Bunker, an economist at Indeed Hiring Lab. “The big question is whether this a temporary lull, or if the quits rate has hit its high point.”

Layoffs fell in December, pushing the layoffs rate down to 1.1 percent from 1.2 percent in November.