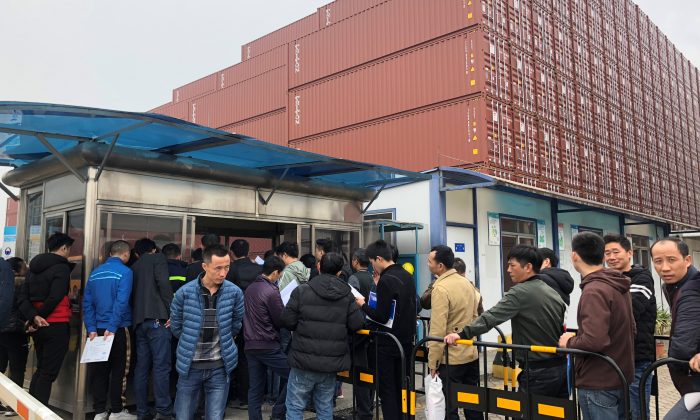 But his euphoria over what he thought was an unexpected bonus quickly turned to despair when Maersk fired Wang on January 3, less than a month after he packed his bags in the southern Chinese manufacturing center of Dongguan.

Wang said he was one of 2,000 workers laid off at the company’s Dongguan transport container factory which has been idle since early December, as the impact of a trade war between Washington and Beijing ripples through industries from logistics to autos and technology.

“I was sure it was a holiday,” said Wang, 35, who said he worked as a painter at Maersk for nearly six years until he was sacked two weeks ago via China’s WeChat messaging service.

Maersk, the world’s biggest container shipper, confirmed in an email to Reuters it had laid off 2,000 workers through “one-on-one” phone calls and WeChat messages.

In November, the company warned the trade war between China and the United States would hit demand for container shipping as the volume of goods shipped slides.

Two subsidiaries of China’s COSCO Shipping, in a direct response to the trade war, have reduced the number of vessels in Guangdong, causing a plunge in regional shipping freight turnover, according to Guangdong’s statistics bureau.

“I heard most container factories started letting people go on leave early this year, so I felt it was normal for us to have a few more days off as well,” said Wang, who earned a base salary of 3,900 yuan ($574) per month.

Around the Lunar New Year holiday, this year scheduled for early February, millions of Chinese, including tens of thousands of migrant workers, travel back home for family reunions in what is the world’s largest annual human migration.

While many factories traditionally close ahead of China’s most important holiday, Reuters interviews with more than a dozen workers, business owners, labor activists and trade lawyers revealed businesses are shutting earlier than usual this year as the prolonged trade war curtails orders.

A recent Reuters visit to three once-thriving towns in Dongguan in Guangdong Province showed clear signs of a slowdown. Scores of shops and restaurants were shuttered, some factories idled and many up for rent.

Danny Lau, a Hong Kong factory owner in Dongguan, said some businesses had closed around 40 days ahead of Lunar New Year.

“Dongguan used to be bursting with factory workers but now with factories gone, people are gone as well,” one taxi driver told Reuters.

“This complex used to be full of workers, eating and chatting when they got off work. Now look at this,” he said, pointing to empty dark alleys in an open air dining place one recent weekday evening.

The slowdown comes as data on Jan. 14 showed China’s exports unexpectedly fell the most in two years in December and imports also contracted, pointing to further weakness in the world’s second-largest economy in 2019.

A recent UBS China survey of 200 manufacturing companies with significant export business or supply to exporters revealed the trade war has had a negative impact on 63 percent of those businesses.

A quarter of those affected have cut jobs, 37 percent have moved production out of China in the past 12 months, while 33 percent plan to move in the next 6-12 months.

China’s giant manufacturing sector was already under pressure from rising labor costs, tighter regulations and a shift towards higher-end production and domestic consumption. But the risk of more and higher U.S. tariffs on Chinese goods has seen the trend rapidly accelerate as more companies look to move supply chains away from China.

U.S. President Donald Trump has vowed to increase tariffs on $200 billion worth of Chinese imports on March 2 if Beijing fails to take steps to protect U.S. intellectual property and allow more market access for U.S. businesses, among other steps.

Guangdong, home to more than 100 million people, is China’s biggest provincial economy, with its $1.3 trillion GDP comparable to that of Australia or Spain. A slowdown in Guangdong bodes ill for other export-oriented provinces along the Chinese coast, and would also drag on national growth should the trade war persist.

“As a major export province, Guangdong’s economy has been greatly affected by the trade war,” said Shenzhen-based independent economist Song Qinghui. “Many enterprises have suffered from bleak business, orders have fallen sharply, and the number of factories deciding to shut down their business is not in minority.”

Determining the scale of the slowdown through data is difficult, however, given Guangdong Province recently stopped publishing a monthly economic indicator that gauges manufacturing growth momentum.

Other data shows Guangdong’s manufacturing workforce dropped more than 6 percent in the third quarter of last year to 12.71 million from a year earlier.

In a further bearish sign, the value of export orders to the United States signed in November at China’s largest trade fair in Guangdong dropped 30.3 percent on the year.

“If you are servicing a U.S. brand, U.S. market, then of course the company will be in very deep trouble,” said Sunny Tan, deputy chairman of the Federation of Hong Kong Industries, which represents more than 30,000 Hong Kong-owned factories in China’s Pearl River Delta.

While some may not be hurting badly financially right now, “they know it’s going south,” he added.

As orders trickle in and some production lines grind to a halt, many businesses have cut hours and done away with overtime.

“Without overtime, we don’t have much salary left if you deduct social security and food. All we care about is the tangible money that we can see,” said Ye Minghua, 25, a worker at Kam Pin Industrial Ltd, which has a metal-coating factory in Dongguan.

Around a fifth of the factory’s 200 employees have already left for the holidays, while some production lines have been suspended, said King Lau, assistant to the managing director at Kam Pin.

New orders were expected to fall by 30 percent if tariffs are increased to 25 percent in March, he added.

More factories are likely to shutter their gates for good over the next few weeks, with industry watchers forecasting some owners, unable to bear the hefty cost of bankruptcy, will simply disappear.

“It’s tough to close down a manufacturing factory in China these days … it’s easier to bail,” said trade lawyer Sally Peng of Sandler, Travis & Rosenberg. “After Chinese New Year, when all the workers go, they may not come back.”