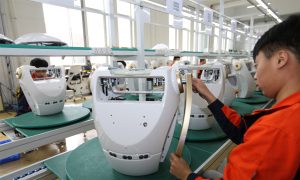 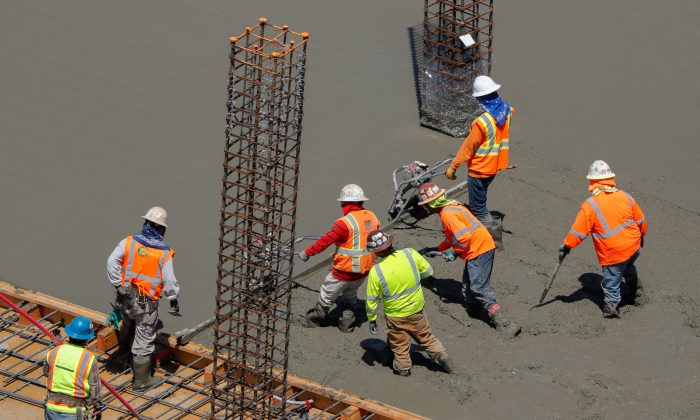 Workers pour cement at a construction site for an office town in downtown San Diego, Calif., on April 23, 2019. (Reuters/Mike Blake)
US News

The economy expanded by 75,000 jobs in May, which was much less than expected. But the unemployment rate has remained at 3.6 percent, which is the lowest since December 1969, according to the Bureau of Labor Statistics (BLS).

The data suggests the job market has cooled, but not to a point where it would harm employment. In fact, there are some signs the market is still improving.

The job growth came far below the 185,000 additional jobs forecast by economists polled by Reuters. But the number was also above the 27,000 jobs estimated by the ADP National Employment Report.

The blockbuster unemployment rate was the redeeming factor of the BLS report. The rate only includes jobless people who sought out employment in the past four weeks. If those who looked for a job in preceding 12 months were included as well as those who had a part-time job but wanted a full-time one, the rate declined to 7.1 percent—the lowest since December 2000.

The slower job growth, paradoxically, pushed the stocks up, as traders seemed to bet it would make the Federal Reserve more inclined to decrease interest rates later this year. The Standard and Poor 500 and Dow Jones Industrial Average indexes were up more than one percent on June 7.

The Fed has hinted at a possible rate cut earlier this week, sending stocks up, despite some worries over the ongoing U.S.-China trade dispute and new U.S. tariffs looming over Mexico.

President Donald Trump has put a 25 percent tariff on $250 billion of annual Chinese imports and, on June 6, said he’ll make a decision after the G20 Summit in late June on whether to expand the tariffs to another $300 billion worth of products.

China responded to the U.S. tariffs by imposing its own on $110 billion of U.S. goods. Trump is expected to meet Chinese leader Xi Jinping at the summit.

Meanwhile, Trump has also announced a 5 percent tariff on imports from Mexico, effective June 10, in an attempt to make the trade partner respond more vigorously to the growing stream of migrants who travel from Central America through Mexico and enter the U.S. illegally.

The Border Patrol has apprehended nearly 133,000 people who entered the United States illegally in May. That’s the most in one month since March 2006 and more than three times more than in May 2018.

Trump said he will increase tariffs by 5 percentage points each month, up to 25 percent, if Mexico doesn’t adequately address the issue.

To negotiate an agreement on the matter, Mexico sent a delegation which has been meeting daily with a U.S. team led by Vice President Mike Pence since June 5.

“The president’s going to … look at a bunch of options, and weigh all the options over the weekend,” outgoing White House economic adviser Kevin Hassett told CNBC. “People feel like they’re going to be presenting the president when he gets back with some positive choices.”

Trump said on June 7 there’s a “good chance” an agreement could be reached, which also seems to have been reflected in the stock market gains.

On June 6, Mexico said it had offered to send 6,000 national guard troops to its border with Guatemala to secure the crossing. Officials at the talks have indicated that protocols around sending asylum seekers to Mexico or other third-party countries while their U.S. claims are processed are also part of the mix.

The leftist administration of Mexican President Andrés Manuel López Obrador said earlier that it blocked the bank accounts of 26 people for alleged links to human trafficking, while it detained on June 5 at least 350 migrants crossing into Mexico and arrested two prominent migrant rights activists.

Meanwhile, Mexico has prepared a list of possible retaliatory tariffs targeting U.S. products from agricultural and industrial states regarded as Trump’s electoral base, a tactic the Chinese regime has also used with an eye toward the Republican president’s 2020 re-election bid.