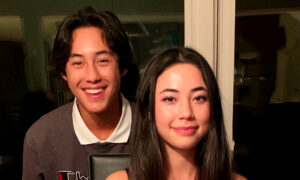 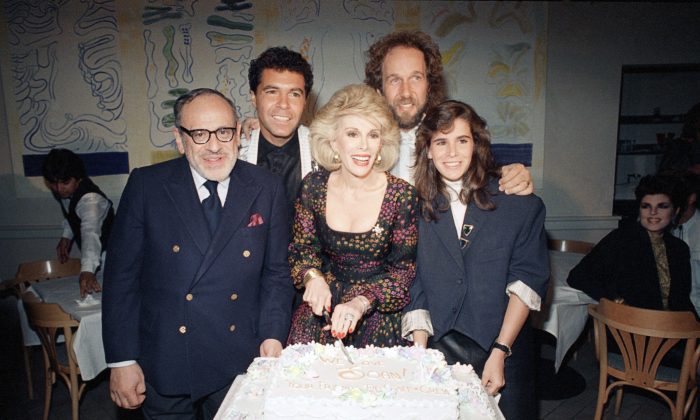 Comic Joan Rivers, center, cut a cake presented by her staff and crew at a party in her honor at the Columbia Bar and Grill in Los Angeles on Sunday, May 18, 1987. Standing at River's side are her husband, Edgar Rosenberg, and her daughter Melissa. In the background are announcer Clint Holmes and musical director Mark Hudson. (AP Photo/Reed Saxon)
US

Rosenberg was Rivers’ second husband. Rivers annulled her marriage with her first husband, James Sanger, after he told her that he didn’t want children after their marriage.

Rivers and Rosenberg met in New York City after Rivers appeared on The Tonight Show with Johnny Carson.

“Edgar’s sophistication—the education at England’s Rugby School and Cambridge, the superb English tailoring, the omnivorous addiction to books, the impressive breadth of knowledge, the flair for elegance, the obsessive commitment to show business—hit Joan between the eyes,” People magazine reported.

“Moreover, he had mastered the machinery of the show business world that was her consuming ambition. He was the No. 1 assistant and virtual son to the legendary public relations consultant Anna Rosenberg (no relation). He had worked as an assistant producer for NBC, and had produced five feature films, including The Poppy Is Also a Flower.

“For 31-year-old Joan, incurably wounded, permanently insecure from years of rejection and failure in her struggle to become a comic—’a battered child,’ as she puts it—here was Mr. Right.”

“We filled each other’s gaps like two pieces of a puzzle. I gave him warmth. He gave me style.”

After 22 years of marriage, the German-born American film producer, who would go on to work on several other projects with his wife, passed away at age 63 in a guest room of the Four Seasons Hotel on August 15, 1987.

Rosenberg appeared to overdose on Valium, according to what the police told the Philadelphia Inquirer.

Rosenberg left a suicide note and three tapes on which he recorded messages–one for his wife, one for their daughter Melissa, and one for his business manager.

Rivers’ spokesman said that Rosenberg had “suffered a major heart attack in October 1984 and underwent quadruple bypass surgery, has been in poor health recently and greatly depressed.”

Rivers’ told People magazine that she tried to deal with her husband’s death by immersing herself in her work.

“I can say exactly what I think onstage,” she said.

“And on a good night when 500 people have said, ‘Yeah, we think the same way’—I come off feeling wonderful.”

Rosenberg was an important pillar in Rivers’ life.

“I was losing everything – my best friend, the only stability in my life, the only person I totally trusted, my rock,” said Rivers.

“Suddenly I realized that I drew all my strength from Edgar.”