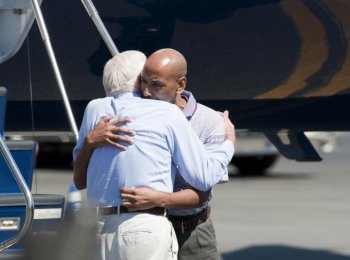 Gomes was jailed in North Korea after he illegally entered the country from the south in January. He was sentenced to eight years of hard labor with a $600,000 fine, according to the Carter Center.

Carter, 85, traveled to North Korea on Wednesday and met with North Korea’s No. 2 Kim Yong Nam.

After Gomes set foot on his home soil, his family members wrapped their arms around Gomes, who had been jailed for eight months.

“This has been a long, dark and difficult period—for Aijalon and for our family,” the family said in a statement. “We are grateful to all the people who made today possible.

“And, we are so very grateful for the thoughts, prayers and good wishes of so many Americans who shared our pain, and can now share our joy.”

Carter’s visit was neither requested nor sponsored by the federal government, the Carter Center stated. Nevertheless, the Department of State issued a statement congratulating Carter on his effort.