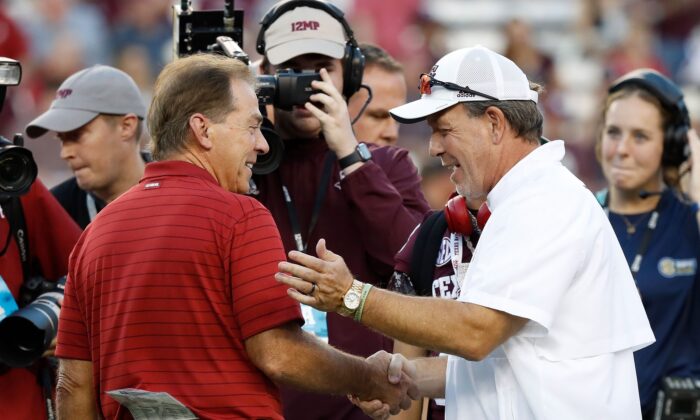 “I know the consequence is going to be difficult for the people who are spending tons of money to get players,” said Saban on Wednesday at an event for July’s World Games in Birmingham among business leaders. “We were second in recruiting last year. A&M was first. A&M bought every player on their team. Made a deal for name, image, and likeness.”

“We didn’t buy one player, all right … But I don’t know if we’re going to be able to sustain that in the future, because more and more people are doing it. It’s tough,” said Saban, who also called out Jackson State and Miami basketball.

“Hell, read about it in the paper. Jackson State paid a guy $1 million last year—that was a really good Division I player to come to the school,” said Saban regarding five-star prospect Travis Hunter who switched to Deion Sanders’ coached Jackson State after initially choosing Florida State.

Sanders responded on Twitter stating that Saban’s accusation was untrue, saying that he will “address that LIE Saban told.” Sanders jokingly included that he doesn’t get paid a million dollars.

“It was in the paper, and they bragged about it. Nobody did anything about it. I mean, these guys at Miami that are going to play basketball there for $400,000, it’s in the newspaper. The guy tells you how he’s doing it.”

On Thursday, Fisher, former assistant to Saban at LSU including the 2003 national title team, made an impromptu news conference in response to Saban’s comments.

“It’s despicable that a reputable head coach can come out and say this when he doesn’t get his way or things don’t go his way,” said Fisher,” referring to Saban’s loss to another former assistant in the recent NCAA Championship to Georgia head coach Kirby Smart.

“And the parity in college football he’s been talking about? Go talk to coaches who have coached for him,” insisted Fisher. “You’ll find out all the parity. Go dig into wherever he’s been.”

“We’re done,” Fisher said emphatically. “He showed you who he is. He’s the greatest ever, huh? When you got all the advantages, it’s easy.”

The 2022 recruiting class ranked Texas A&M first ahead of Saban’s Alabama, including a defeat of Bama during the regular season.

“We never bought anybody, no rules are broken. Nothing was done wrong,” continued Fisher. “I don’t cheat. I don’t lie.”

The 56-year-old Fisher is a native of West Virginia who initially attended Clemson University to play baseball before transferring to Salem College to play quarterback under head coach Terry Bowden.

Fisher would get his first head coaching position at Florida State in 2010, before accepting the reigns at Texas A&M in 2017 on a 10-year, $75 million contract.

Saban said he attempted to reach out to Fisher without a response, and apologized for singling out individuals or programs but held firm to his stance against booster programs recruiting players.

“I feel bad about it. But I’m not changing my philosophy,” said Saban on SiriusXM radio. “I look at the betterment of college football. What is good for the game?”

Regarding the conflict with Fisher as SEC meetings are nearing, Saban responded, “I really wasn’t saying that anybody did anything illegal in using name, image, and likeness. I didn’t say that. That was something that was assumed by what I said, which was not really what I meant. Nor was it what I said. There’s nothing illegal about doing this. It’s the system that allows you to do it. And that’s the issue that I have.”

In response, Fisher is looking forward to the meetings. “I don’t mind confrontation. Lived with it my whole life. Kind of like it myself. Backing away from it isn’t the way I was raised.”