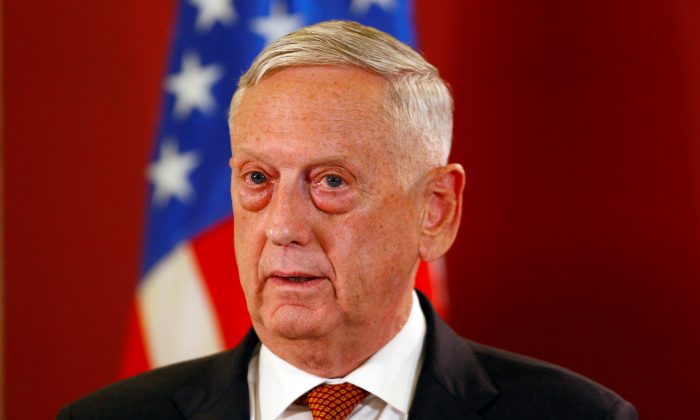 President Donald Trump on Dec. 20 announced that Gen. Jim Mattis will be retiring at the end of February next year.

“General Jim Mattis will be retiring, with distinction, at the end of February, after having served my Administration as Secretary of Defense for the past two years,” Trump wrote on Twitter.

He praised Mattis’s tenure, citing “tremendous progress” made in the purchasing of new defense equipment.

Trump said a new secretary of defense will be named soon.

Mattis’s resignation comes a day after the president announced U.S. troops will be pulling out of Syria.

In his resignation letter, Mattis wrote: “Because you have the right to have a Secretary of Defense whose views are better aligned with yours on these and other subjects, I believe it is right for me to step down from my position.”

Mattis highlighted his “core belief” that America’s strength is “linked to the strength of our unique and comprehensive system of alliances and partnerships.”

The defense secretary also said that “we must do everything possible to advance an international order that is most conducive to our security, prosperity, and values.”

Trump, while defending the importance of international alliances, has repeatedly pointed out that the United States pays a disproportional amount for international defense.

Specifically, he has criticized the fact that the majority of NATO members are not meeting the requirement to spend 2 percent of GDP on defense, as stipulated by the alliance.

Trump thanked Mattis for his help in pushing alliance members to increase their spending.

“General Mattis was a great help to me in getting allies and other countries to pay their share of military obligations,” Trump wrote in his tweet.

The president, during an October interview with CBS, appeared to criticize Mattis, saying that the defense secretary was “sort of a Democrat” and could be leaving.

Mattis in his letter pledged his full effort for a “smooth transition that ensures the needs and interests of the 2.15 million Service Members and 723,079 DoD civilians receive undistracted attention of the Department at all times so that they can fulfill their critical, round-the-clock mission to protect the American people.”