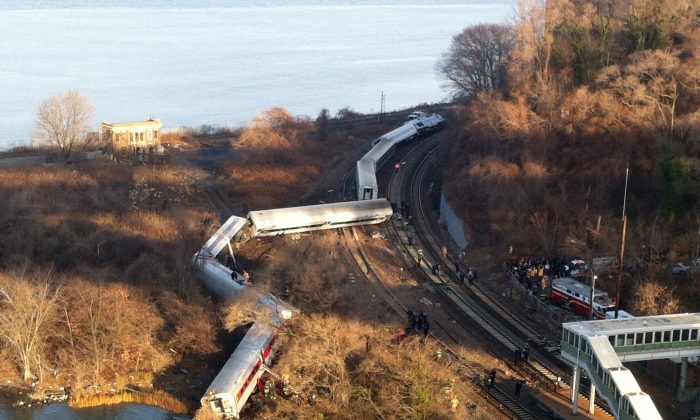 Jim Lovell of Cold Spring has been identified as one of the four dead after the Metro North train derailment on Sunday.

Lovell, 58, had a job in lights and sound in Manhattan.

Lovell may have been traveling to work, Richard Shea, the supervisor of Cold Spring, told the Wall Street Journal.

Shea said Lovell loved history and was well-respected in the community. He spent a lot of time with his three sons.

“They lived on the lake. I was watching him do backflips off the diving board with his boys, hiking with his boys, doing whatever they wanted,” Shea said. “He was one of the boys.”

Longtime friend Janet Barton elaborated on Lovell’s destination, saying Lovell was headed into Manhattan to do lighting and sound work on the famed Christmas tree at Rockefeller Center.

Lovell was the husband of Nancy Montgomery, a local elected official. He also worked as an audio technician for NBC’s Today show, Executive Producer Don Nash said. “Sad news,” he said via Twitter. “Our condolences to his family.”

Out of the roughly 150 passengers on the train, over 60 were injured.

Eleven of the injured were believed to be critically injured and another six seriously hurt, according to the Fire Department.

The train operator was among the injured, Cuomo said.

The governor said the track did not appear to be faulty, leaving speed as a possible culprit for the crash. But he noted that the National Transportation Safety Board would determine what happened. The Federal Railroad Administration was also sending 10 investigators to the scene.