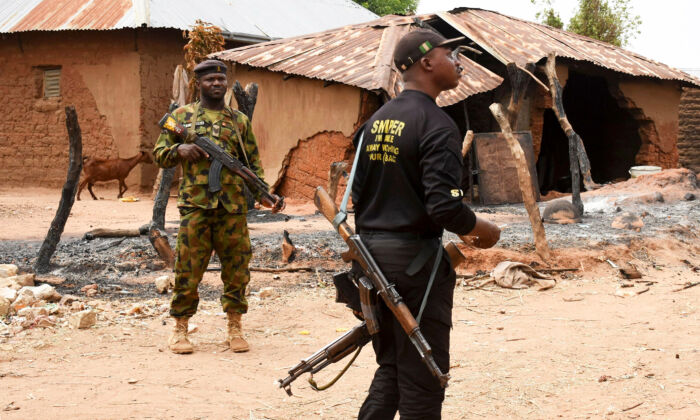 Security personnel stand guard in the Kukawa Village in the Kanam Local Government Area of the Plateau state on April 12, 2022, after resident's houses were burnt down during an attack by bandits. President Muhammadu Buhari vowed on April 12, 2022, there would be no mercy for those behind the killings of more than 100 people. (AFP via Getty Images)
World

1,000-man gangs on motorbikes strike on doorstep of capital
By Douglas Burton

Officials in Nigeria acknowledged on April 13 that so-called bandits and the Islamic terrorist group known as Boko Haram have formed a united front to attack trains and vehicles headed to the capital, Abuja.

While the union of the two criminal groups has been suspected for a year, the government’s chief spokesman, Alhaji Lai Mohammed, and his defense ministry counterpart, Gen. Bashir Magashi, confirmed the suspicions at a press conference in the president’s compound in Abuja.

“What is happening now is that there is a kind of unholy handshake between bandits and Boko Haram insurgents,” Mohammed said, according to media reports.

“Preliminary reports of what transpired at the Kaduna train attack show that there is a kind of collaboration between the bandits and dislodged Boko Haram terrorists from the northeast.

“What happened two Mondays ago shook the whole country, yes, but that is the modus operandi of terrorists,” Mohammed said.

He was referring to the derailing of a passenger train on March 28 near Kaduna by a group that used an improvised explosive device, killing nine people. The perpetrators, who kidnapped 168 others, are believed to be the same gang that attacked a train last year and shot down a Nigerian air force fighter in Zamfara state on July 18, 2021, according to Murtala Rufa’i, a historian at Usmanu Danfodiyo University in Sokoto and a recognized expert on bandits.

The leader of the sophisticated attacks is Kachalla Ali, and his base of operation is Birnin Gwari, in Kaduna state,” Rufa’i told The Epoch Times.

Ali’s high-profile attacks have established his position as the most powerful gang leader in the northwest, Rufa’i says. His gang members are reputed to be “fearless fighters,” according to media reports.

“I am happy that the Nigerian government has acknowledged that the Boko Haram insurgents and the bandits are allied,” said Dr. Gregory Stanton, an African genocide expert in Virginia and the founder of Genocide Watch.

“The U.S. government also needs to acknowledge that there is a connection between the bandits and the ethnic Fulani jihadists.

“It’s time for the U.S. government and other governments to wake up and realize this is already a genocide. This is not violence due to climate change.”

The sophistication of the attack was evident in the planning and logistics; the use of improvised explosive devices isn’t typical for the bandits. In addition, the terrorists had arranged for a fleet of vehicles to take the 168 hostages quickly from the scene.

A week after the train attack, the bandits released a wealthy hostage, Alwan Hassan, acting CEO of the Bank of Agriculture, and posted a video in which three masked bandits spoke in Arabic and the Hausa language, according to media reports.

Security analysts have told The Epoch Times that some bandits speaking in the video spoke with Fulani accents, but one spoke with an accent linking him to northeast Nigeria, where Boko Haram has maintained a presence for 12 years.

Some analysts speculate that the jihadists behind the train attack are linked to the Ansaru insurgency that split from Boko Haram and has operated in Kaduna as a kidnapping gang.

“They said they’re not after ransom and that govt knows what they want,” Bulama Bukarti, a senior analyst in the Extremism Policy Unit of the Tony Blair Institute for Global Change, wrote on Twitter, referring to the video.

“Judging from their language and posture, these are not bandits. They are likely members of the Ansaru faction of Boko Haram and demand is likely the release of their leaders who have been [in] detention for long.”

Nigerian media reported on April 12 that the bandits had announced that the train hostages could be released in exchange for the release of 16 of their top commanders.

The bandits were killing and taking hostages in several villages on the border zone of the federal capital territory in the early days of April, according to conflict reporter Stephen Kefas.

The bandits travel on motorbikes in numbers that approach 1,000, he told The Epoch Times. They have taken their hostages to their forest havens in Shiroro County in northeast Niger state, where they are confident the army won’t attack, Kefas said.

The emerging threat facing Nigeria is reflected in the apprehension of pastors to travel in the country by train or bus, and the level of fear among ordinary citizens has reached a new level, according to Judd Saul, an Iowa-based missionary who for 10 years has administered an NGO called Equipping the Persecuted in Kaduna state.

“We organized a conference in April for 200 clergy who came from all regions in Nigeria,” Saul told The Epoch Times. “What we learned is that no matter what state Nigerians live in, they are afraid for their lives if they have to travel from one town to another.”

The invasion of Boko Haram in Shiroro County of northern Niger state was reported by The Epoch Times in April 2021, when Gov. Abubakar Sani Bello at a press conference pleaded with the federal government for assistance.

Yet the federal government until April 13 hadn’t acknowledged the alliance of these two potent threats to civil order.

The term “Boko Haram” means “foreign learning is forbidden.” It’s loosely applied to terrorist groups ranging from Ansaru—linked to al-Qaida—to the “Islamic State of West Africa,” which has overshadowed Boko Haram since the suicide death of Boko Haram leader Abubakar Shekau in May of 2021.

The number of organized bandits terrorizing villages and towns in the five sprawling states of northwestern Nigeria is believed to be at least 10,000 and may number as many as 30,000, according to James Barnett, a nonresident scholar at the Hudson Institute.

Unlike most jihadists, bandit gangs tolerate the use of narcotics and alcohol, and they victimize both Muslims and Christians.

“If the largest bandit gang of the Northwest really has made [an] alliance with Boko Haram, then God help us!” Rufa’i told The Epoch Times.