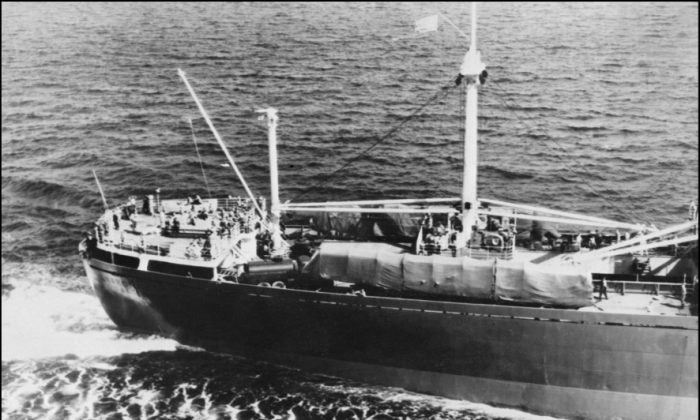 Soviet freighter Anosov carrying missiles in accordance with the U.S.–Soviet agreement on the withdrawal of the Russian missiles from Cuba, on Nov. 9, 1962. (AFP/Getty Images)
Good to Know

The 1962 Cuban missile crisis was as close to a nuclear holocaust as the world has come.

The 13-day confrontation between the Soviet Union and Cuba on one side, and the United States on the other, ended with a U.N. agreement that dismantled the nuclear threat. How President John F. Kennedy handled the tense situation is one of his greatest achievements—worth remembering ahead of the 50th anniversary of his assassination.

Kennedy was seen as confident, facing down his military, intelligence, and State Department advisers nearly alone, conferring mainly with his brother Robert and Secretary of Defense Robert McNamara.

In the heat of the crisis, a U.S. U-2 plane was shot down the by the Soviets, but Kennedy allowed negotiations to continue rather than retaliate. Kennedy had learned from his experience with the failed U.S. Bay of Pigs invasion of Cuba to be skeptical about military advice.

The plan for Cuban exiles to invade Cuba was hatched during the waning days of Kennedy’s predecessor, Dwight David “Ike” Eisenhower’s presidency. It was a CIA operation supported by the joint chiefs.

Kennedy accepted the plan with the added proviso that U.S. forces wouldn’t participate. He wanted it to appear as Cubans fighting Cubans.

The Bay of Pigs was a disaster. Nearly all of the Cuban exiles were captured or killed.

Kennedy realized that he had been naive to trust “the military’s judgment that the Cuban operation was well thought-out and capable of success,” wrote Kennedy scholar and historian Robert Dallek, in an article in The Atlantic on JFK.

Kennedy became depressed over the tragedy, said Evan Thomas, author and assistant managing editor at Newsweek, in a PBS documentary.

He blamed himself for not probing enough. “He never really talked to the generals and what they really thought,” said Thomas.

Kennedy learned that he had been “overly deferential to the CIA and military chiefs,” wrote Dallek.

Today, a nuclear first strike is unthinkable. But the military chiefs that Kennedy inherited, frustrated by the stalemate in the Korean War, were “inclined to use atomic weapons,” wrote Dallek.

To them, it made no sense to show restraint against the enemy.

Kennedy knew that field commanders could launch nuclear weapons on their own, without his go-ahead. He worried that the military and the Soviet leadership were willing to accept nuclear catastrophe.

He was sickened that the chiefs’ nuclear plan called for the annihilation of every major Soviet, Chinese, and Eastern European city, and hundreds and millions of deaths, according to Dallek.

Eisenhower believed that war had become “all or nothing,” and that nuclear war could be chosen to defeat communism, said Thomas. Kennedy felt instead that America could fight small wars, win them, and deter communism that way. Kennedy’s answer to the communist menace became known as the “flexible response.”

In October 1962, aerial reconnaissance photography revealed that the Soviets had installed medium-range ballistic missile sites in Cuba that could target the United States. The chiefs agreed that an immediate air assault against the sites was necessary, with the option later to invade the island.

But Kennedy was skeptical. He didn’t want to back the Soviets into a corner, according to the PBS documentary. He feared the Soviets would blockade West Berlin if the U.S. moved against Cuba, which strategically was much less important than Berlin.

Kennedy decided without seriously consulting with the chiefs on a blockade. It was the best chance of avoiding a nuclear war, according to Dallek.

Soviet leader Nikita Khrushchev ultimately backed down, although Kennedy had to agree publicly as part of a UN agreement not to invade Cuba and secretly to remove obsolete American missiles from Turkey.

When Kennedy met with some of the chiefs afterward, they were disdainful, wrote Dallek. LeMay told Kennedy “the settlement was the greatest defeat in our history.”

Later Kennedy reached an agreement with Khrushchev on a limited test ban treaty, and got it approved in the Senate over the objections of the chiefs. Kennedy’s actions were a watershed moment.