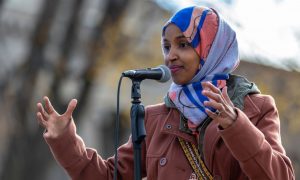 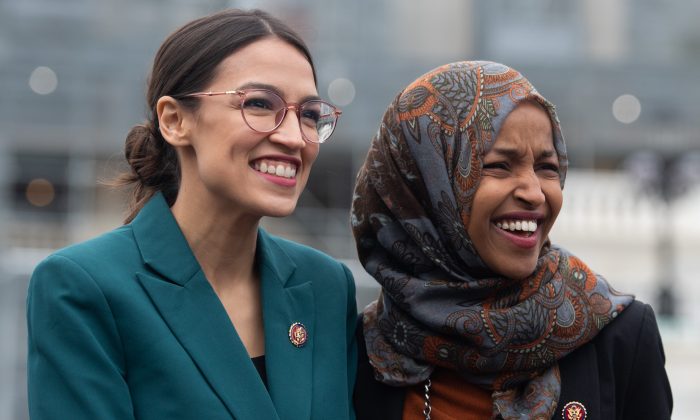 ‘Jexodus’ May Pose Problems for Democrats

President Donald Trump’s claim that “the Democrats hate Jewish people” is giving a boost to what appears to be an embryonic movement encouraging Jews, traditionally a key Democrat voting bloc, to abandon the Democratic Party.

Axios reported the president made the comments to Republican donors March 8, based on statements by attendees. Trump also reportedly said he couldn’t grasp how any Jew could vote for a Democrat these days, given the party’s track record.

The news report didn’t mention if he referenced numerous comments by Rep. Ilhan Omar (D-Minn.), a Muslim, that were widely perceived as anti-Semitic. Congressional Democrats refused to condemn Omar by name and instead, on March 7, the House approved a watered-down resolution denouncing “anti-Semitism, Islamophobia, racism and other forms of bigotry.”

Trump’s comments give voice to growing sentiments among Jewish Democrats and others that the party’s tolerance of heightened anti-Semitism in its ranks and its hostility to the Jewish state of Israel should cause Jews to stop supporting it.

As Democrats have lurched leftward, they have also generally been reluctant to condemn the flagrant anti-Semitism of Nation of Islam leader Louis Farrakhan, and of Women’s March organizers Linda Sarsour and Tamika Mallory, as well as that exhibited by leaders of Black Lives Matter, a movement that the Democratic National Committee formally endorsed in 2015.

“Apologies are no longer enough. That is why I am calling on my fellow Jews to join me in pulling our support from the Democratic Party,” he wrote. Trump and the Republicans are now “the true friends of Israel and the Jewish people” and have “embraced values that were once embraced by the Democratic Party,” by, for example, relocating the U.S. embassy in Israel to Jerusalem and opposing Palestinian terrorism.

Others are already using the new portmanteaus “Jexit” and “Jexodus,” which couple “Jewish” with “exit” and “exodus,” respectively, to describe this budding movement. The linguistic innovation is modeled after “Brexit,” the movement to take Britain out of the European Union, and, in the United States, after “Blexit,” a movement to get blacks to quit the Democratic Party.

Radio host Wayne Allyn Root is calling upon his “fellow American Jews” to “JEXIT” the party which “coddles, caves and embraces Jew hatred.”

“It’s time to escape to the promised land of the GOP, where Jews are welcomed and appreciated; where capitalism is embraced; where extreme vetting is in place to keep bad people out, who would do harm to Jews; where Israel is America’s best friend in the world.”

The “Jexodus momentum is slowly building,” he wrote. “It will decisively split millennials between Jewish and leftist allegiances … [and] be a slow and ugly process.”

“Exile is a difficult condition … [but] [t]here is no future for the Jews on the Left. History amply testifies to that, from the Soviet Union to Latin America. The Jexodus is inevitable.”

A website, Jexodus.org, has appeared online. It states: “We are proud Jewish Millennials tired of living in bondage to leftist politics. We reject the hypocrisy, anti-Americanism, and anti-Semitism of the rising far-left. … We’re done standing with supposed Jewish leaders and allegedly supportive Democrats who rationalize, mainstream, and promote our enemies. We’d rather spend 40 years wandering in the desert than belong to a party that welcomes Jew-haters.”