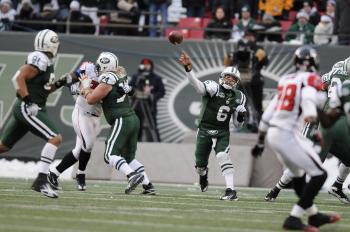 Jets QB Mark Sanchez didn't hold back against the Falcons but he did not enjoy much success. (Jim Luzzi/Getty Images)
NFL

The New York Jets (7–7) missed a golden opportunity on Sunday to improve their chances to reach the playoffs after losing 10–7 to the Atlanta Falcons.

The Jets should’ve played man-to-man against Gonzalez instead of letting the Hall of Fame tight end find a soft spot in their zone defense.

After a major snow removal effort at the Meadowlands, Sanchez returned to action after missing last week’s game due to an injured knee. He played the game with a brace on each knee.

The rookie QB found Braylon Edwards for a 65-yard catch-and-run touchdown late in the first quarter, but that would be all the points the Jets would score.

The Falcons limited the Jets’ top-ranked rushing attack to only 99 net yards.

“We thought we had a great chance to make it to the playoffs,” said Jets head coach Rex Ryan in his post-game press conference.

“We missed three field goals. You’re not going to win many games [doing that]. The execution was poor.”

With the loss, the Jets are one of six AFC teams with 7–7 records and slim chances of reaching the postseason. Their schedule is the most difficult of all remaining AFC teams with games against Indianapolis (14–0) and Cincinnati (9–5) still to come.

The Pittsburgh Steelers (7–7) ended a five-game losing streak with an incredible 37–36 victory over the Green Bay Packers (9–4) at Heinz Field.

On the last play of the game, Ben Roethlisberger, who passed for 503 yards, found Mike Wallace for a 19-yard touchdown. Jeff Reed kicked the extra point for the win. Roethlisberger had moved his team 81 yards in under two minutes for the win—another perfectly executed two-minute drill.

In a game that had four lead changes in the final eight minutes of play, the two quarterbacks threw for a combined 886 yards.

The defending Super Bowl champions will next take on the Baltimore Ravens (8–6) to whom they lost by a field goal on Nov. 29.

After being accused of giving up on his team by certain members of the Carolina Panthers last week, New England wide receiver Randy Moss silenced his critics with a credible performance in a nervy 17–10 road victory over the Buffalo Bills.

The star wideout led his team with five catches for 70 yards and a touchdown.

New England (9–5) has not looked its best over the past two weeks with narrow victories over below-average teams (Carolina and Buffalo). Tom Brady completed fewer than half his passes and threw for only 115 yards. The Patriots could only run for 109 net yards against a Buffalo defense that is ranked worst against the run.

While the Patriots have a two-game lead over the Dolphins and the Jets, the Dolphins own the tiebreaker against them. The AFC East title is still very much up for grabs. Both the Patriots and Dolphins face teams over the next two weeks with playoff aspirations.