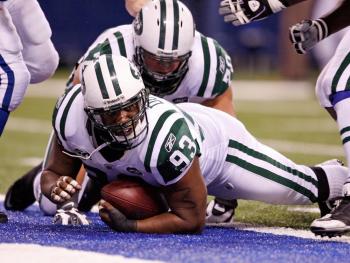 Rahul Vaidyanath
Journalist
Rahul Vaidyanath is a journalist with The Epoch Times in Ottawa. His areas of expertise include the economy, financial markets, China, and national defence and security. He has worked for the Bank of Canada, Canada Mortgage and Housing Corp., and investment banks in Toronto, New York, and Los Angeles.
View profile
Follow
biggersmaller
Print
It turns out the perfect season wasn’t all that important to the Indianapolis Colts (14–1). And the New York Jets (8–7) were the beneficiaries of Indy’s long-range planning winning 29–15 on Sunday—as Peyton Manning and a host of other starters were rested after taking a lead in the third quarter.

The regular season loss for the Colts was their first since Week 8 of the 2008–09 season (Tennessee). The loss put an end to an NFL record 23-game regular season winning streak.

It really was a perfect day for the Jets. With Miami (7–8), Jacksonville (7–8), and Baltimore (8–7) all losing earlier in the day, the Jets began the game against Indy knowing they controlled their own destiny—win their final two games and they’re in the playoffs.

The Jets put together an effective combination of offense, defense, and special teams to beat the Colts.

On defense, the Jets’ top-ranked unit returned a fumble for a touchdown after sacking rookie backup QB Curtis Painter.

On special teams, Brad Smith returned the opening second half kickoff 106 yards for a touchdown. The play was the longest in Jets history.

The Colts responded to Smith’s touchdown with a Donald Brown 1-yard TD run but failed on the two-point conversion. With a 15–10 lead in the third quarter, the Colts pulled Manning, Reggie Wayne, and Dallas Clark among others.

Manning clearly wanted to get back in there as the pained expression on his face told the world.

“Hopefully we came out healthy, which was important,” said Manning. “We still had a chance to win [with starters on the bench], disappointed we didn’t.”

“The perfect season has never been one of our goals,” said Caldwell who suffered his first loss as a head coach. “You still have to look at your [long-term] objectives.”


Clearly, the Super Bowl is more important than a 16–0 regular season, although Colts fans weren’t pleased with the game’s outcome. Boos were heard as players shook hands after the game. But Manning and several starters escaped additional pounding from the Jets.

The Jets stuck to their guns—run the ball, play tough defense, and don’t turn the ball over. They’ll have to repeat that performance next week when the AFC North champion Cincinnati Bengals (10–5) visit the Meadowlands.

All of a sudden, a very bleak scenario after last Sunday’s loss at home to Atlanta (8–7) looks a lot better now for Rex Ryan and the New York Jets.