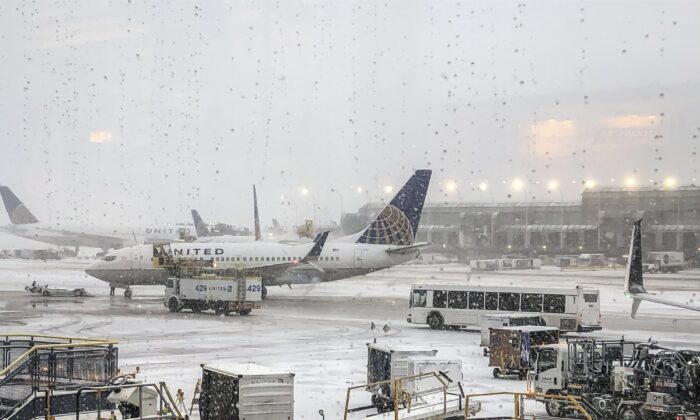 Snow falls on the United Terminal at O'Hare Airport in Chicago on the morning of Nov. 11, 2019. (Daryl Van Schouwen/Chicago Sun-Times via AP)
Companies

JetBlue Airways has trimmed down almost ten percent of its flights through Jan. 13, according to data from airline data firm FlightAware, as cancellations climb across the country with the surge of Omicron and a hit of bad weather.

The New York-based carrier said that many of the crew members were calling in sick from the highly-transmissible variant of the CCP (Chinese Communist Party) virus, and the company made the decision to give passengers an advance warning and prevent last-minute rescheduling hassles.

“We have seen a surge in the number of sick calls from Omicron,” a JetBlue spokesman said to the Wall Street Journal. “We entered the holiday season with the highest staffing levels we’ve had since the pandemic began and are using all resources available to cover our staffing needs.”

JetBlue, the sixth-largest airline in the country, has canceled 145 flights or 14 percent on Friday and expects a 19 percent cancellation on Saturday based on data collected from FlightAware. Ninety-three flights have been delayed on Friday. Omicron is the dominant variant currently, rapidly spreading through the population, but has displayed mild symptoms compared to other variants.

“We expect the number of COVID cases in the northeast—where most of our crew members are based—to continue to surge for the next week or two,” JetBlue’s spokesperson said in an emailed statement to Reuters. “This means there is a high likelihood of additional cancellations until case counts start to come down.”

More than 3,100 cancellations were reported worldwide by FlightAware, along with 1,200 into and out of the United States.

Besides staff shortages, inclement weather with unusually strong jet-stream winds are one of the main reasons behind domestic and international flight disruptions.

Heavy snowfall across the Midwest and Pacific Northeast have clogged airports for about a week now. Some of the worst-hit airports include Seattle-Tacoma International Airport, Los Angeles International, and Chicago O’Hare.

Alaska Air scrapped almost 20 percent of its flights due to ice-formation on aircraft. Passengers have apparently been asked to wait three or more days for alternate flights.

The CDC said that it has not considered a vaccine mandate for domestic travel, and has reduced the number of days of quarantine for those infected with asymptomatic cases of COVID-19 from 10 to five days. This was supposedly due to lobbying by airline companies including Delta and JetBlue.

Delta has, meanwhile, canceled 250 flights out of 4,179 scheduled departures on Thursday, according to CNBC, with more planned through the weekend.

JetBlue representatives did not immediately respond to a request for comment by The Epoch Times.