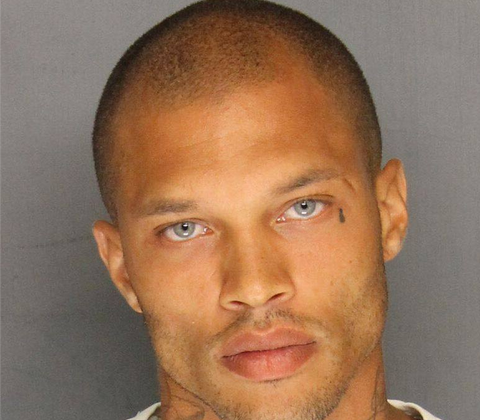 A super-viral hoax is claiming “handsome felon” Jeremy Meeks was killed by his wife. There’s no shred of truth to it, and Meeks is still in jail.

The bogus article was posted on Huzlers.com, a self-described “satirical” site.

“According to jail records, Jeremy Meek was released from jail just before midnight on Tuesday night. About an hour later, just before 1 a.m. on Wednesday morning, Stockton Police found him laying in the road in the area of Dayton and West in Central Stockton. He was taken to Community Regional Medical Center where he died from his wounds shortly after arriving,” it reads.

Here’s the disclaimer for the website, which is found on the bottom-left of every page: “Huzlers.com is a combination of real shocking news and satire news to keep its visitors in a state of disbelief.”

The article had more than 250,000 shares on Facebook as of Saturday.

Huzlers.com is among the new crop of so-called “satire” websites that appear to just publish fake news stories without any sense of humor, exaggeration or irony. The website has published a few other death hoaxes, including a recent one about a woman dying after taking the “ice water challenge.”

But on Twitter as of Saturday morning, a number of people apparently believed the Meeks death hoax.

“#jeremymeeks Rip love the Price of Fame…,” one user tweeted.

Another wrote: “Oh my GOD JEREMY MEEKS WIFE SHOT HIM.”

Said another, “Jeremy Meeks wife killed him less than an hour after he got out.”

Meeks is still in jail awaiting another court date. His last appearance was on July 8.

Meeks was arrested in June as part of a gang sweep, and he faces a single charge of a felon in possession of a firearm.

According to KXTV in Sacramento, “That one charge could lead to a prison term of 10 years and a fine of $250,000. San Joaquin County District Attorney spokesman Robert Himelblau said federal gun charges lead to longer prison sentences.”

This means that he’ll be in a federal court, which does not allow photos.