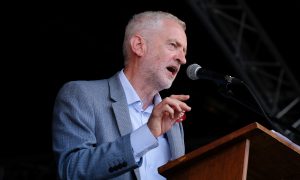 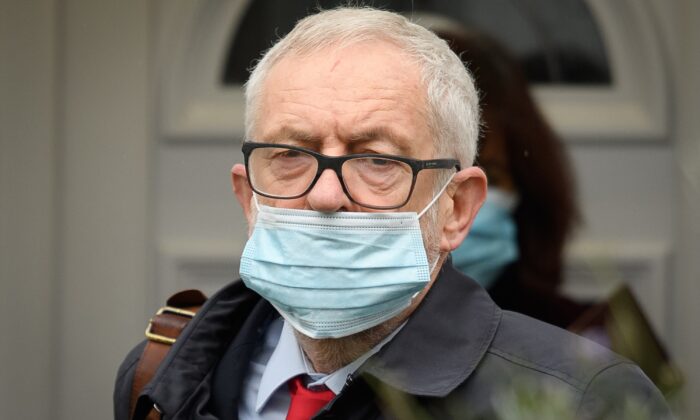 Former Labour leader Jeremy Corbyn’s party membership has been reinstated on Thursday after a 19-day suspension.

Corbyn was suspended on Oct. 29 over a statement he made after the Equality and Human Rights Commission’s (EHRC) published the findings of its investigation into allegations of antisemitism in the Labour Party.

A panel from the Party’s governing National Executive Committee agreed on Thursday to reinstate the formal leader.

The LabourList said that Corbyn is expected to get a “reminder of conduct,” but it’s yet to be decided whether he will get back the party whip, which was removed from Corbyn when he was suspended.

The formal party leader said on Twitter that he was “pleased” to have been reinstated.

Current Labour Leader Keir Starmer said that while Corbyn’s comments on the EHRC’s findings—which led to his suspension—should “shame us all,” he would not allow a focus on one individual.

“Jeremy Corbyn’s statement in response to the EHRC report was wrong and completely distracted from a report that identified unlawful conduct in our tackling of racism within the Labour Party. This should shame us all,” Starmer wrote in a tweet.

“I will not allow a focus on one individual to prevent us from doing the vital work of tackling antisemitism,” he added.

Starmer said his first priority as the party leader is to root out antisemitism.

Earlier on Thursday, Corbyn posted on social media a statement he submitted to the party on the day he was suspended, which he said was to clear up “any confusion” caused by his previous statement.

“To be clear, concerns about antisemitism are neither ‘exaggerated’ nor ‘overstated’. The point I wished to make was that the vast majority of Labour Party members were and remain committed anti-racists deeply opposed to antisemitism,” the statement reads.

“I regret the pain this issue has caused the Jewish community and would wish to do nothing that would exacerbate or prolong it,” Corbyn said, and added that he fully supports Starmer’s decision to accept all the EHRC recommendations in full, and pledged to “help the Party move on, united against antisemitism.”

The Jewish Labour Movement (JLM) said it was “extraordinary” that the Labour Party appeared to have “expedited this case for hearing by a factionally aligned political committee.”

The JLM said Corbyn’s statement is neither sincere nor adequate.

“He has offered no apology for his total failure of leadership to tackle antisemitism in the Labour Party, or contrition for his role in allowing politicl manipulation of the disciplinary process by his own office in his name,” the JLM said in a statement.

“His statement on the day of the report’s publication made no mention of this and was grossly offensive as it downplayed the reality of antisemitism in the Labour Party. Today’s decision will only embolden those who agreed with him.”

The investigation was launched in May 2019, when Corbyn was party leader, following complaints from Campaign Against Antisemitism and the Jewish Labour Movement.

Corbyn stepped down after the Labour Party lost in the 2019 general election, the worst defeat Labour has suffered since 1935, partly because of the antisemitism allegations.

A less controversial Kier Starmer was elected in 2020 as Corbyn’s successor to rehabilitate Labour’s electability.

After The EHRC published its findings on Oct. 29, Starmer said the party he led “accepts this report in full and without qualification,” while Corbyn said that he did not accept all the report’s findings and that “the scale of the problem was also dramatically overstated for political reasons.”

The Labour Party suspended Corbyn and removed his Labour whip shortly after his statement, “in light of his comments … and his failure to retract them subsequently.”

Corbyn expressed “strongly contest” to his suspension, calling it a “political intervention.”