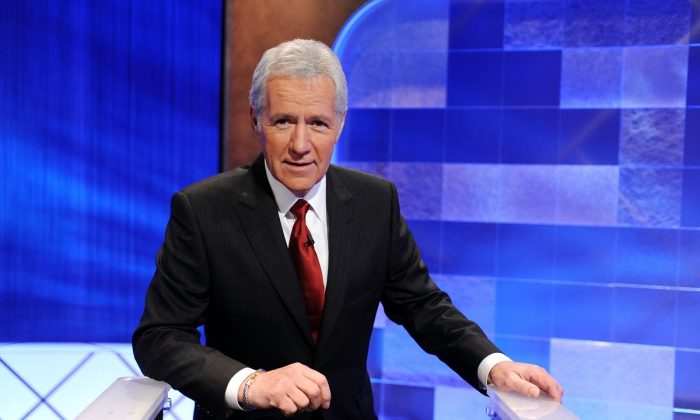 'I Wish I had Known Sooner'
By Zachary Stieber

Longtime “Jeopardy!” host Alex Trebek recorded a public service announcement on cancer, saying he wishes he had known he had it sooner.

Trebek, 79, teamed up with the World Pancreatic Cancer Coalition to record the video.

“Pancreatic cancer is the only major cancer with a five years survival rate in the single digits. Now, in order to help patients help and survive this disease, more attention and awareness are needed.”

He said he wanted to spread the word about symptoms and the disease.

“I wish I had known sooner that the persistent stomach pain I experienced before my diagnosis was a symptom of pancreatic cancer,” he says in the video. “Other common symptoms can include mid-back pain, unexplained weight loss, new-onset diabetes and the yellowing of the skin or eyes.”

Trebek said people should wear purple in November to raise awareness of pancreatic cancer and share information about the cancer and its symptoms on social media.

The PSA came several weeks before World Pancreatic Cancer Day, which is slated for Nov. 21.

The cancer affects the pancreas, an organ that sits behind the stomach.

According to the American Cancer Society, about 56,770 people (29,940 men and 26,830 women) will be diagnosed with pancreatic cancer in the United States this year.

Trebek announced earlier this year that he was diagnosed with pancreatic cancer, releasing a video announcement.

“It’s in keeping with my long-time policy of being open and transparent with our Jeopardy! fan base. I also wanted to prevent you from reading or hearing some overblown or inaccurate reports regarding my health,” he said at the time.

Trebek completed chemotherapy in August and began hosting the 36th season of “Jeopardy!” as it premiered.

In September, he said he had to start chemo again after a setback.