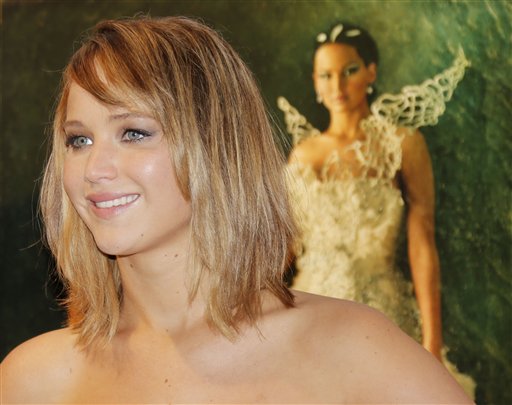 Actress Jennifer Lawrence poses for photographers during a photo call for the film The Hunger Game: Catching Fire at the 66th international film festival, in Cannes, southern France, Saturday, May 18, 2013. (Photo by Todd Williamson/Invision/AP)
Entertainment

Lawrence, the star of Hunger Games among other works, would have many others star struck in her presence. Yet, praised by co-stars Lenny Kravitz and Josh Hutcherson for her modesty, she “adorably geeks out” in an encounter with Bridges, as the Daily Mail described it.

She mustered the courage to return after running away and apologized for interrupting an interview a reporter was conducting with Bridges, but explained she had to introduce herself because she is such a big fan. The reporter gave her the microphone to interview Bridges, as shown in Extra footage.

She asked Bridges what his favorite role was, prompting him with a further question, “Does it rhyme with ‘the schmood’?” Presumably, she was referring to “The Dude”—Bridges’s role in the 1998 film The Big Lebowski, listed as his top role in a list of 10 of his greatest roles on the International Movie Database (IMDb).

Bridges did not tell Lawrence his favorite role, but said he is excited by a new film directed by Scott Cooper, Out of the Furnace, due to enter theaters in December. The film stars Christian Bale, whose character picks up the search for his missing brother where the authorities fail.

Extra interview with Lawrence, her Co-Stars, and footage of Lawrence’s encounter with Bridges: