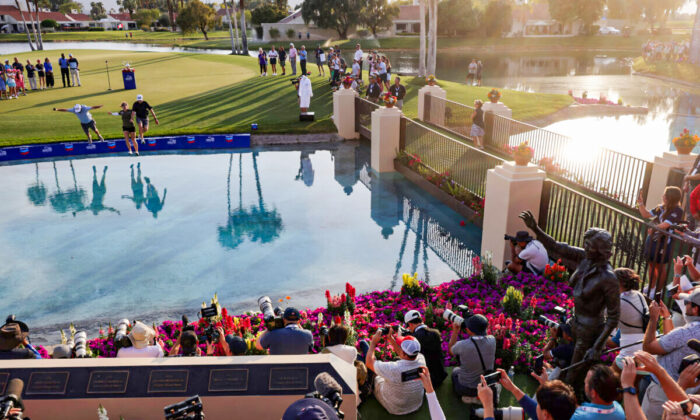 Chevron increased the total purse to among the largest in women’s golf at $5 million, and 625 points are up for contention in the race to the CME Globe.

Following early rounds of 66, and 70, Kupcho finished the tournament at 14-under with Sunday’s round of 74 to take the winning purse of $750,000. She had a six-stroke lead to start the final round after  Saturday’s low round of 64, capturing the 54-hole scoring record of 16-under.

“I think it’s surreal. To be a major winner is really special, and to be the last person here at Mission Hills to jump into Poppie’s Pond, it’s all really special,” said the 24-year old Kupcho from Colorado.

Kupcho is the first American to win and leap into Poppie’s Pond since Brittany Lincicome in 2015 and Lexi Thompson in 2014.

The large lead was enough to hold off the field as Solheim Cup teammate, Jessica Korda, climbed the leaderboard into second to finish at 12-under.

Kupcho was one-under through the front-nine with three birdies and two bogeys. She birdied #11, but seemed frustrated after making three bogeys on holes #10, #13, #14.

Kupcho re-focused to hit her driver tee shot in the tightest fairway on the course at #15, and followed with a long approach shot that left her less than two feet for birdie. The insurmountable lead allowed Kupcho to close out the tournament with a two-stroke victory with bogeys on #17, and #18.

“I came out just trying to shoot a couple under,” added Kupcho. “I shot 8-under yesterday, so I figured if someone can do that, then they deserve to be in a playoff. That was my mentality and what I was fighting for all day. Obviously didn’t get there, but still pulled it out.”

Kupcho’s best previous finish on the LPGA came at another major with a tie for second at The Evian Championship in 2019 in her rookie year.

In her senior year at Wake Forest, Kupcho won the individual 2018 NCAA Division I Golf Championship, along with winning the inaugural August National Women’s Amateur in 2019, which took place this week three years ago.

Kupcho had attributed her success in the tournament to her putting; and happens to be a newlywed since February to her putting coach Jay Monahan.

“To just be able to [win] quickly after my wedding and be able to celebrate with my husband, it’s really special,” said Kupcho.

Monahan was the caddie for American Sarah Schmetzel, who finish tied for 25th. The two excitedly followed Kupcho for the final holes in support after finishing the tournament.

Korda quickly jumped into a tie for second, with Patty Tavatanakit, making an eagle on the par-four hole #3.

But was unable to get any closer as Korda drove the ball into the left rough, and missed her par-saving putt from about four feet, after her approach into the greenside bunker.

Having won six tournaments on tour since turning professional 12 years ago at 17 years old, Korda’s 12-under was her best finish in a major championship and the eighth runner-up performance of her career.

“I was further back starting than I wanted and bunch of lipouts [from previous rounds]. Sometimes you got to be lucky to win majors, and I still haven’t found that yet,” said Korda. “Second place is not bad after being 3-over through 7, so pretty proud of myself.”

Also a newlywed as of December, Korda is the daughter of retired professional tennis players Petr Korda, who won a major at the 1998 Australian Open, and Regina Rajchrtova of the Czech Republic.

Her parents migrated to the United States during their tennis careers and raised their family in Florida. Her younger brother, Sebastian, was world-ranked 38th on the ATP.

Sister, Nelly Korda, remains #2 on the Rolex World World Golf Rankings, while still recovering from a blood clot in her arm.

“American golf is doing great and she’s definitely kind of the future of it,” added Korda of Kupcho’s victory.

Pia Babnik, 18-year old in high school junior from Slovenia, shot a final round of 66 to finish third at -11. The two-time Ladies European Tour winner turned professional two years ago, and played for the second time in the United States.

“I’m really happy with the round, with how I played. Just really, really happy,” said Babnik. “It’s been great. It’s such course that you have to be patient, and that’s something that I did.”

The LPGA heads to Hawaii next week, April 13–16, for the Lotte Championship at Hoakalei Country Club at Ewa Beach in Oahu, before returning to California April 21–24 to Wilshire Country Club in Los Angeles.