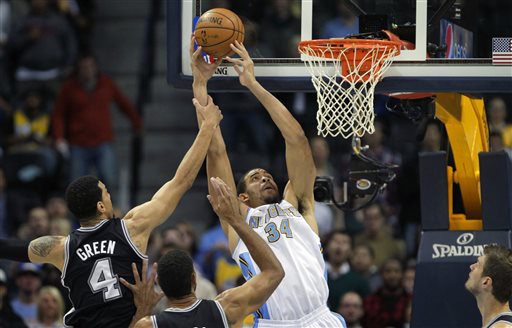 At least ten teams have expressed interest in JaVale McGee after he and the Philadelphia 76ers agreed to part.

Philly was trying to convince McGee to take a buyout but he said he didn’t want to do that, prompting the Sixers to just waive him. The team will still pay him the rest of the money he’s owed this season as well as the $12 million next season.

Now, a number of teams are jumping into the competition to snag McGee off the market. Although he’s underperformed his whole career and has been cut by two teams now, McGee is still 7’0″ and can rebound and score in spurts.

A source told Marc Spears of Yahoo that ten teams, mostly playoff contenders, have already expressed interest in the 27-year-old.

Spears says that the Warriors could be one of the teams, since they need insurance in case Andrew Bogut gets hurt again.

Sam Amick of USA Today indicated that the San Antonio Spurs, Dallas Mavericks, Houston Rockets, and Miami Heat are among the teams that could very well be interested in acquiring McGee to bolster their benches.

The Spurs would seem a strange fit for the immature McGee, but the other three teams could certainly use another big man, even if it’s just for insurance in case of further injuries. Chris Bosh and Tyson Chandler are among the current injuries across those teams.

Other teams that could try to acquire McGee include the Chicago Bulls, with Taj Gibson injured; the Portland Trail Blazers, whose backup big Joel Freeland has just recovered from injury; and the New Orleans Pelicans, who are relying on backup Alexis Ajinca for heavy minutes due to injuries.