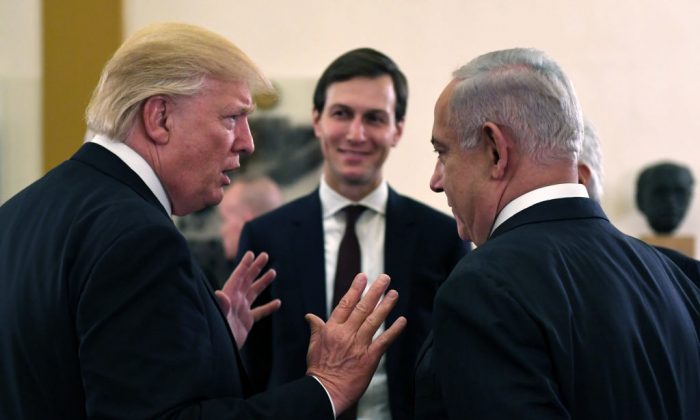 Presidential adviser Jared Kushner flew to Jerusalem on June 21 to meet with the leaders of Israel and Palestine as part of a U.S. effort to revive the Middle East peace process.

Kushner, President Donald Trump’s 36-year-old son-in-law, has little experience in international diplomacy or political negotiation, but has proven himself a trusted and capable member of the White House senior staff.

He will spend barely 20 hours on the ground, and leave shortly after midnight. In a brief media appearance with Israeli Prime Minister Benjamin Netanyahu in Jerusalem, the Israeli leader welcomed Kushner in the spirit of the two nation’s common goals: security, prosperity, and peace.

“I know of your efforts, the president’s efforts, and I look forward to working with you to achieve these common goals,” said Netanyahu.

“Thank you, the president sends his best regards and it’s an honor to be here with you,” said Kushner.

Kushner will also travel to Ramallah, in the Israeli-occupied West Bank, for talks with Palestinian President Mahmoud Abbas.

Neither Israeli nor U.S. officials would provide details on the discussions and there are no plans for media-shy Kushner to take questions from reporters.

Kushner hopes to restart the Arab-Israeli peace process and to eventually stop the conflict, which has ranged from intermittent rocket attacks to full-fledged warfare for almost 70 years.

This month marks the 50th anniversary of the Six-day War, when Israel fought Egypt, Jordan, and Syria and emerged with territory, which the Palestinians see as the basis for a future Palestinian state.