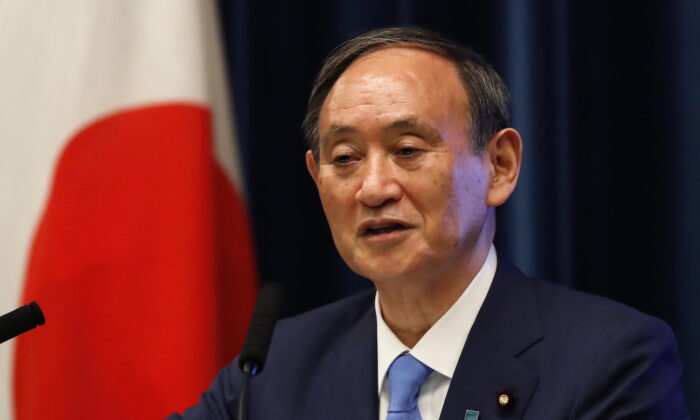 Japan’s Prime Minister Yoshihide Suga announced on Sept. 3 that he will not be running for the Liberal Democratic Party (LDP) re-election in September, after about a year in office.

Suga, who took over after Shinzo Abe resigned last September due to ill health, cited Japan’s response to the CCP (Chinese Communist Party) virus pandemic as reasoning for stepping down, telling reporters that he did not have time to focus on COVID-19 measures as well as campaigning for the LDP job.

“I have decided not to run for the party leadership elections, as I would like to focus on coronavirus measures,” he told reporters.

“But doing both takes enormous energy and I have decided that I should just choose one or the other,” he said. “As I have repeatedly told people, protecting people’s lives and health is my responsibility as prime minister, and that’s what I will dedicate myself to.”

It comes as Suga saw his support ratings drop to below 30 percent.

Japan is currently grappling with its fifth and largest wave of COVID-19 infections, driven by the more infectious Delta variant.

There are currently more than 1.5 million virus cases while Tokyo and much of the country remain under a state of emergency due to expire on Sept. 12.

Suga’s decision to not run in a ruling LDP election in September means the party will choose a new leader, who will become prime minister.

LDP has the majority in Japan’s parliament, meaning the new government leader likely will be whoever is elected the party’s leader. The official start of the campaign is Sept. 17 and elections will be held on Sept. 29.

The 72-year-old, who is the son of a strawberry farmer from Japan’s northern prefecture of Akita, enjoyed support ratings as high as 70 percent early in his tenure because he was a leader from the common people rather than blue-blood political families like Abe.

He introduced a series of pragmatic measures including digital transformation and administrative reforms, however, the latest media surveys showed his support ratings have declined to around 26 percent.

There is currently no clear favourite to replace the outgoing leader.

On Thursday, Fumio Kishida, one of the only two lawmakers who have so far declared their candidacy, criticised Suga’s handling of the CCP virus pandemic as too little and too slow, and urged a stimulus package to combat the pandemic.

“In crisis management, being more thorough in assuming the worst-case scenario, rather than believing enough has been done, is necessary,” he told a news conference.

“I would have legislation revised so state and local governments have strong authority to curb people’s movement and secure medical resources,” Kishida said.

Kishida also said that as party chief, he would aim to bring socio-economic activities back to near normalcy by early 2022, noting that a stimulus package must be compiled “swiftly” and include cash payments to non-permanent workers and others who will be affected by steps to contain the flow of people.