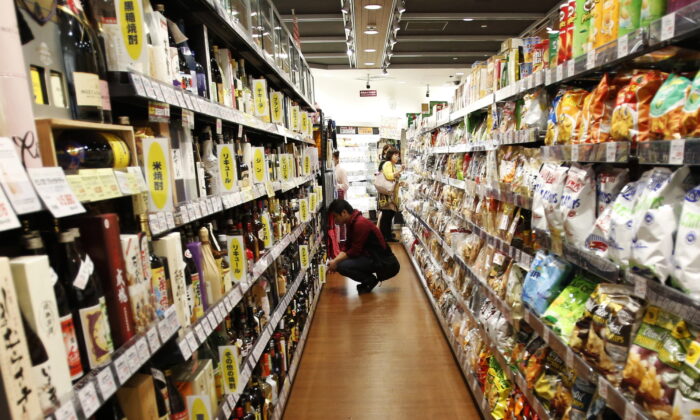 A shopper looks at alcohol products at an aisle in a luxury food store in Tokyo on Sept. 25, 2014. (Yuya Shino/Reuters)
Inflation

TOKYO—Japan’s wholesale inflation remained near record-high levels in March as the Ukraine crisis and a weak yen pushed up fuel and raw material costs, data showed on Tuesday, adding strains to the resource-poor economy heavily reliant on imports.

While rising wholesale prices will help accelerate consumer inflation toward the central bank’s elusive 2 percent target, it could hurt an economy still reeling from the coronavirus pandemic, analysts say.

The corporate goods price index (CGPI), which measures the price companies charge each other for their goods and services, rose 9.5 percent in March from a year earlier, data showed.

That followed a revised 9.7 percent spike in February, which was the fastest pace on record, and exceeded a median market forecast for a 9.3 percent gain. The March index, at 112.0, was the highest level since December 1982, the Bank of Japan (BOJ) said.

“With raw material costs rising so much, companies won’t be able to make money unless they raise prices. The days of discount war are over,” said Takeshi Minami, chief economist at Norinchukin Research Institute.

“Core consumer inflation may accelerate to around 2.5 percent later this year and stay above 2 percent for longer than initially expected, weighing on consumption and the economy,” he said.

The yen-based import price index jumped 33.4 percent in March from a year earlier, the data showed, a sign the yen’s recent declines are inflating the cost of imports for Japanese firms.

Japanese companies have been slow in passing on rising costs to households as soft wage growth weighed on consumption, keeping consumer inflation well below the BOJ’s 2 percent target.

But analysts expect core consumer inflation to accelerate around 2 percent from April due to surging fuel costs and the dissipating effect of past cellphone fee cuts.

The rising inflationary pressure heightens the chance the BOJ will revise up its inflation forecast at its next quarterly review due April 28, analysts say. The bank’s current forecast is for core consumer inflation to hit 1.1 percent in the year that began in April.