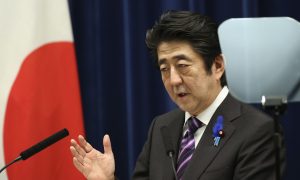 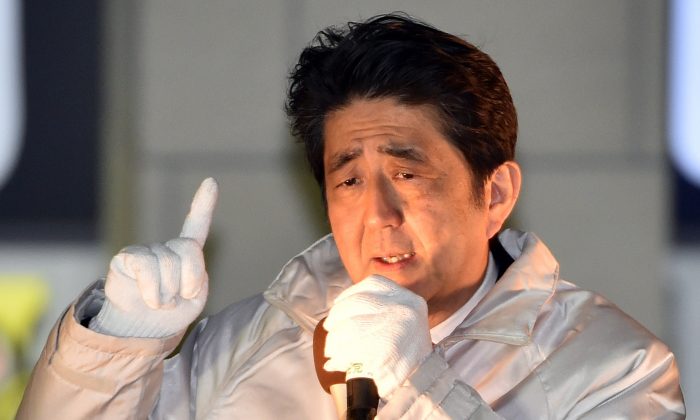 TOKYO—Japanese Prime Minister Shinzo Abe is counting on a landslide victory in parliamentary elections Sunday that will likely return his ruling coalition to power with an even bigger majority, empowering him to pursue an ambitious agenda of political and economic reforms.

“This is the only way!” is the slogan Abe is driving home in his campaign speeches. For Japanese voters, that is probably the case.

The economy is back in recession, the government’s popularity ratings have slid and messy campaign finance scandals have roiled Abe’s Cabinet. Normally, that would be bad news for the incumbent. Yet Abe is virtually the only game in town thanks to Japan’s tendency toward a one-party political system, voter apathy and a lack of viable alternatives.

“If we create a country where everyone is given a chance, Japan will grow much bigger,” Abe said, accusing the opposition Democratic Party of being too pessimistic over the country’s declining population, which is one factor behind Japan’s slowing economy. “We are finished if we give up!”

Surveys showed many voters planned to stay away from polling stations. Fed up with or indifferent to the choices on offer, a large share support no party in particular, so Abe’s Liberal Democratic Party may win by default.

“The problem of this election is there is actually no choice for voters,” said Yu Uchiyama, a professor of political science at Tokyo University. “Many people will choose Abe as a kind of negative choice. There are no alternatives.”

The main opposition Democratic Party of Japan was in power from 2009 to 2012, but lost voters’ confidence amid perceptions of ineptitude and after failing to deliver on campaign pledges and struggling to guide the country after the 2011 earthquake, tsunami and nuclear disasters.

The DPJ is fielding candidates in only about one-fifth of the 295 single seat districts. Polls show it taking fewer than 100 seats in Sunday’s elections, including its winners in 180 proportional representation districts.

“The DPJ government was seen as so unsuccessful in so many ways that it is no longer viewed as the true, viable alternative to the LDP,” said Ethan Scheiner, a political science professor at the University of California, Davis.

Many voters have swung back to the Liberal Democratic Party, a conservative party (despite its name) that guided Japan through its high-growth years in the 1960s and ’70s and has ruled the country for all but about four years since 1955.

Most Japanese live in cities, but the LDP still dominates in the countryside, where votes in lower house elections hold up to 2.43 times the value of those in some urban districts – a situation deemed unconstitutional in Supreme Court rulings yet to be enforced. And the Liberal Democrats have a strong ally in their coalition partner, the Buddhist-backed Komei Party, whose loyal members can be counted on to vote for ruling coalition candidates.

“The way the system is structured, it is very difficult for an opposition party to defeat the LDP,” said Scheiner.

Efforts to form new alliances with other opposition parties have made little headway, and the remaining splinter parties will likely win only a handful of seats each, with the Japan Communist Party, a traditional protest vote, picking up a share of swing ballots.

“It’s an inherent problem in Japanese politics,” said Uchiyama. “The parties are so fragmented.”

The Liberal Democrats are poised to win big Sunday. They had 295 seats in the lower house when Abe dissolved the parliament, or Diet, on Nov. 20. They could win up to 320 seats out of 475 up for grabs, says Takao Toshikawa, editor in chief of Insideline and Tokyo bureau chief of the Oriental Economist. That would give them the two-thirds majority needed to amend the constitution – one of Abe’s pet projects – even without the backing of the Komei Party.

Some voters are puzzled over why Abe is holding an election at all.

“Why are they dissolving the parliament? It makes no sense to me,” said Toshio Yazawa, an 84-year-old as he sunned himself recently in a park north of Tokyo.

Abe has portrayed the election as a referendum on his “Abenomics” policies for reviving the economy through massive monetary easing and strong public spending, both intended to spur inflation. He also has proposed a slew of reforms to enhance Japan’s waning competitiveness.

The recovery that began as Abe took office in late 2012 took hold in early 2013 as the yen weakened and share prices soared. But incomes for most workers are flat or falling, and a sales tax hike in April chilled demand after a rush of spending early in the year, nudging Japan back into recession and prompting Abe to postpone a second sales tax increase originally planned for next year.

He then called the snap election, saying he wanted a renewed public mandate, a maneuver most analysts say is aimed at ensuring he can stay in office at least for another four years. That could give him enough time to move toward some of his more nationalistic goals, including revising Japan’s constitution.

Abe was prime minister in 2006-2007, when he quit due to health problems after just a year in office. The 2012 election that returned him to power netted a record low voter turnout of 59.3 percent, and Sunday’s vote is forecast to be even lower.

Michael Cucek, a fellow at Temple University in Tokyo, anticipates a “terrible, terrible election” for the opposition Democratic Party. But that may prompt some more serious thinking about the lack of a viable political opposition in Japan, which he says is unhealthy.

So in that regard, “I am hopeful about this election,” he said.

From The Associated Press. AP writers Ken Moritsugu and Eugene Hoshiko contributed to this report.