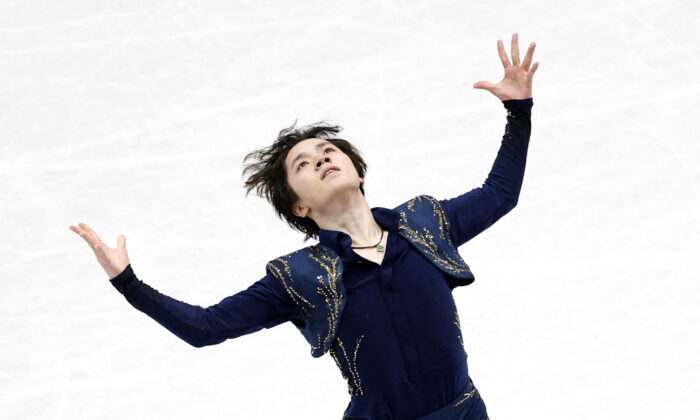 MONTPELLIER, France—Japan’s Shoma Uno claimed his first major title when he secured the gold medal in the men’s singles event at the world championships on Saturday, making the most of the absence of two of the favorites.

Later on Saturday, French duo Gabriella Papadakis and Guillaume Cizeron, the only Beijing Olympic gold medalists present in Montpellier, followed up on their Olympic title by securing their fifth world crown in the ice dance.

With two-time Olympic champion Yuzuru Hanyu and Beijing gold medalist Nathan Chen skipping the event through injuries, Yuma Kagiyama, runner-up at the Olympics last month, was among the leading contenders, alongside compatriot Uno.

The 18-year-old Kagiyama failed to impress, however, and seemed to know it as he left the ice with a wry smile on his face.

He scored 191.91 on his free skate for a total of 297.60 after failing to properly land his quadruple loop.

That was well below his Olympic score of 310.05 and certainly not enough to prevent Uno, who was leading after the short program, from prevailing.

Uno did not disappoint and his performance, although not flawless, saw his coach Stephane Lambiel raise his arms in celebration.

He scored 202.85 for a total of 312.38 after posting new personal bests in both the short program and the free skate.

“I’m very happy; I worked hard for this. And for once I finish first. I’m very satisfied and I want to thank my coach for this,” said Uno after delighting the Montpellier crowd with a routine set to Maurice Ravel’s Bolero, a popular choice in figure skating.

American Vincent Zhou took the bronze medal with a score of 277.38.

Russian and Belarusian skaters were banned from competing following Russia’s invasion of Ukraine.

In the ice dance competition, Papadakis and Cizeron set a world-record score with a total of 229.82, a 2.84 improvement on their previous best mark from the Beijing Games.

“It’s the most beautiful competition of our careers, the support has been incredible,” Cizeron said after they enjoyed the warmest welcome from a rapturous crowd. “We couldn’t be more grateful.”