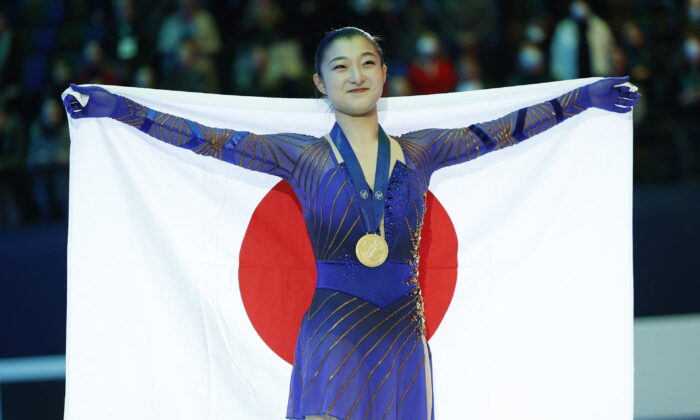 MONTPELLIER, France—Japan’s Kaori Sakamoto claimed her maiden figure skating world title when she prevailed in the women’s singles event in a depleted competition at which Russia’s invasion of Ukraine still loomed large on Friday.

Sakamoto, a bronze medallist at the Beijing Olympics, finished ahead of Belgium’s Loena Hendrickx and American Alysa Liu, who were second and third respectively.

In the absence of Anna Shcherbakova and Alexandra Trusova, the Beijing Games gold and silver medallists, after Russian skaters were banned from competing following Russia’s military action in Ukraine, Sakamoto delivered.

“Four years ago, I didn’t compete at the worlds after the Olympic Games because I felt burned out. It wasn’t easy to get ready for this just a month after the Games, but I’m glad I did. It was all worth it,” she said.

“It’s difficult to find one person to thank. I want to thank all my coaches because without them it wouldn’t be possible. I like to think I managed to repay them with this.”

Earlier on Friday, Gabriella Papadakis and Guillaume Cizeron, the only Beijing Olympic gold medalists at the world championships, beat their world record to lead the ice dance after the short program with 92.73.

The competitions at the world championships end on Saturday with the free dance.