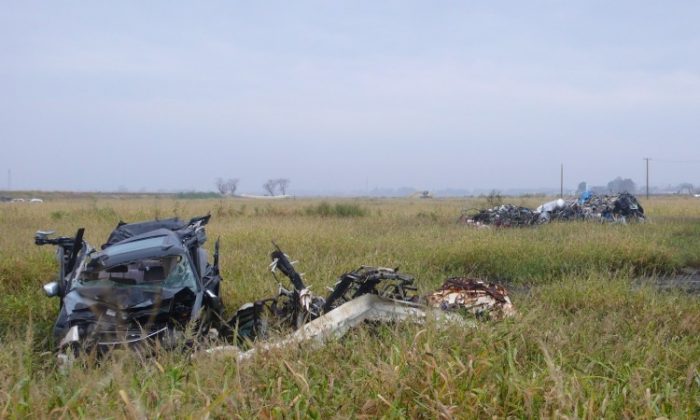 Mangled cars in the Arahama District of Sendai City still lie where they were deposited by the Japan tsunami on March 11. The now overgrown fields were thriving farms before the disaster. (Cindy Drukier/The Epoch Times)
Asia & Pacific

MIYAGI, Japan—Getting off the bullet train in Sendai, there are no obvious scars from the disaster eight months ago. Despite being the closest city to the epicenter of the monster magnitude-9.0 quake—Japan’s most powerful in recorded history—downtown suffered only modest damage and recovered quickly.

A mere 10-minute drive away from the city center, however, entire coastal communities were swallowed by giant waves as tsunami defenses like concrete dykes and pine forest buffers proved useless.

It is a similar story across the Tohoku region: The unprecedented death and destruction was not wrought by the quake, but by the tsunami that followed.

The enormity of what must be rebuilt is apparent the moment you reach the Tohoku coast. Where family homes and productive farms once stood are now vast fields of overgrown weeds and ragged rice. Here and there a crumpled car or catapulted boat still lie in situ.

Multistory mounds of neatly separated rubble dot the landscape: mangled cars, toppled electric polls, and the remains of bulldozed houses. The parking lot of an abandoned elementary school is a graveyard of tsunami-chewed motorbikes.

Disaster relief was provided to every single municipality in the three worst hit prefectures, Miyagi, Fukushima, and Iwate, plus 113 municipalities in another seven prefectures.

There is a yawning gap between life for tsunami survivors, and those elsewhere in Japan where life is essentially normal and March 11 is in the past.

For survivors, their lives remain shattered. Many will live in “temporary” housing for years to come. They are scattered and traumatized, having lost homes, livelihoods, worldly possessions, and loved ones. Most difficult of all, they have no idea what the future holds.

Isolation and fears about the future are particularly hard on the elderly, who comprise the bulk of the victims. About one in three living in Tohoku are over 65, which is far higher than the national average of 22.7 percent.

As of late October, the government had provided 51,537 temporary housing units. Many are far from the victims’ original homes, sometimes in different prefectures, and often far from their displaced neighbors. There are complaints of inadequate winterization, poor access to health facilities, cramped quarters, and minimal income opportunities, while also being cut off from food aid. This week, The Daily Yomiuri reported that 3,000 temporary housing units in Fukushima haven’t been occupied because evacuees say they fail to meet their basic needs.

The Kaihoku temporary housing site in Ishinomaki, Miyagi Prefecture, is a single pre-fab bunker of seven units on the edge of a park parking lot. Most sites are bigger, housing as many as 100 families. But the government has erected units wherever they can find a suitable plot of land.

Inside, Takeo Iwanami, 74, spends most of the day sitting on his cot staring blankly at the TV. After spending four months at the Ishinomaki Minato Elementary School relief center, he was moved here.

“I’m not getting used to it,” he says, pulling on a cigarette. Life was better at the evacuation center, he says, because “everyone was there.” Here his neighbors are strangers; they don’t talk except for a polite “good morning.” He’s been told most of his former neighbors are at a different temporary housing site (assignments were made by lottery), a much bigger one, but he’s never been there and doesn’t know where it is.

His loneliness is palpable, but ironically people envy him because he has the space to himself and his structure is bigger than most. Iwanami complains that it’s too quiet. Although children play outside the building, the double glass of his sliding door deadens their voices, and he closes the curtains so they won’t stare.

In the immediate aftermath of the disaster, thousands of Japanese and foreigners flocked to the afflicted coast to help. Most volunteers have gone home; the challenge is to keep reminding the rest of Japan, and the world, that help is still needed.

Some who answered the call decided to stay. On April 10, Chun Kawara, a 31-year-old bike mechanic from Kyoto packed his pickup truck with a year’s worth of food and drove to Ishinomaki. He’d heard that with roads destroyed and debris everywhere, bicycles were the best way to get around, but there were no volunteers specializing in fixing bikes.

When he arrived, he set up shop in a corner of the Ishinomaki Minato Elementary School evacuation center. In the early days, he fixed about 50 bikes per day—recovered bikes dredged up from the sludge, and bikes donated from all over Japan. There wasn’t even water then to wash his hands clean of the bike grease, fish, and rancid mud that permeated everything. In six months he estimates he worked on 4,000 bikes.

Kawara figures he’s talked to everyone in town. “It’s been a very intense year. I’ve never met or said goodbye to so many people,” he says while crossing the muddy schoolyard waving to the few remaining volunteers. Just the day before, the last 12 tsunami refugees were relocated to temporary housing so the school could reopen.

Down the street from the school, in a washed out house, Kawara helped an elderly bike mechanic repair his house and get his shop going again. The building is now livable—barely. Kawara sleeps there, runs the shop and has been entrusted with an emergency cache of food for the community in case of another disaster. There are still almost daily aftershocks off the east coast of Japan.

Kawara says the experience has definitely changed him. Things he used to find troublesome are nothing now. It has also taught him humility.

“Looking back at the first days here, I put myself on a pedestal,” he said. But that changed when he went back to Kyoto on his only day off in six months. “I saw my pictures in frames and shoes in the entranceway, and I realized what they had lost. I realized there was no way to understand the victims. So I gave up trying to understand them, and just wanted to serve them.”

It’s clear Kawara has become something of a community hero. Shogo Miura, a 78-year-old retired construction worker with a beaming smile, shared that Kawara paid for every replacement part with his own money.

“I saw many volunteers, but he’s a special one. Not only me, everyone in town is very thankful to him,” said Miura, adding that the newspaper should run a poster-sized photo of Kawara.

Kawara is also a graphic artist and his painted signs adorn building and fledgling businesses around town. Clearly he has made a mark in many ways.

When asked if he plans to go home at the end of his year, Kawara answers without hesitation. “No. I can’t leave.”

One initiative to address the gap between the victims and the rest of Japan where life is normal, is the Center for Remembering March 11, in Sendai City. The center’s goal is to archive the disaster while experiences are still fresh, and at the same time, share those experiences now.

The center puts cameras and recorders in the hands of volunteers who gather and edit the stories, which are quickly put online. Chinatsu Shimizu, the center’s curator, says at first it was mostly volunteers doing the interviewing, but as victims started to engage, they began to record their own stories.

This also fills the gap between what is seen on mass media and how victims actually feel. For example, Shimizu says that soon after the disaster, the media reported that people in Tohoku were very patient and were not complaining. “In reality, they had lost their words,” she says. “They didn’t know what to say, so they gave up trying to explain.”

Takuya Kodama contributed to this report.