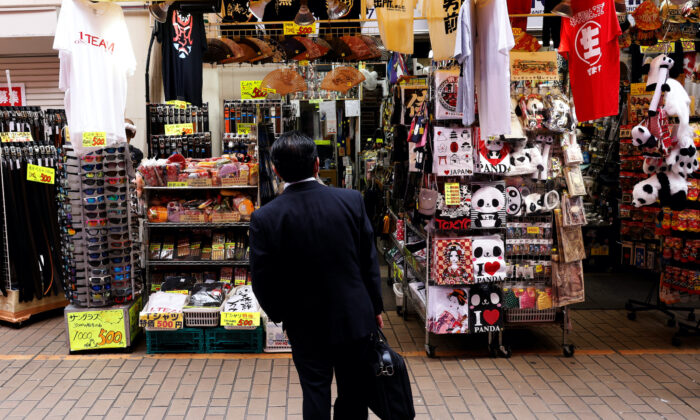 A man looks at a shop at the Ameyoko shopping district in Tokyo on May 20, 2022. (Kim Kyung-Hoon/Reuters)
Inflation

The data challenges the Bank of Japan’s (BOJ) view that the recent rise in prices is temporary, and does not warrant withdrawing monetary stimulus.

But with wage growth subdued, many analysts expect the BOJ to remain firmly focussed on stimulating a sluggish economy rather than fight inflation with interest rate hikes.

It stayed above the BOJ’s 2 percent target for a second straight month, following a 2.1 percent rise in April which was the fastest pace of increase in seven years.

The core-core CPI, which strips away both volatile food and fuel costs, was up 0.8 percent in May from a year earlier after climbing by the same pace in April.

“I don’t think core consumer inflation will hit 3 percent unless a broader range of daily goods and services prices rise.”

While soaring fuel costs remained the key driver of the rise in CPI, the pace of year-on-year increase in energy prices slowed to 17.1 percent in May from 19.1 percent in April.

But prices of food excluding volatile vegetable, meat, and fish rose 2.7 percent in May, marking the fastest growth since 2015.

In a glimmer of hope, separate data released by the BOJ on Friday showed the price companies pay each other for services rose 1.8 percent in May year-on-year.

The increase, which was the fastest annual pace since 2020, partly reflected a rebound in demand for services as COVID-19 infection numbers fell, the data showed.

Rising fuel and food prices are expected to keep Japan’s core consumer inflation above the BOJ’s 2 percent target for most of this year, analysts say.

But there is little to cheer for the BOJ, which views such cost-push inflation as temporary and a risk to consumption, with households facing rising living costs and slow wage growth.